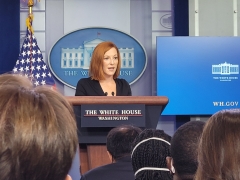 (CNSNews.com) – The White House warned Friday that another terrorist attack in Kabul, Afghanistan, is likely on the heels of the terror attack that killed 13 U.S. soldiers in Kabul.

“The President met this morning in the Situation Room with his national security team, including our commanders and diplomats in the field. The Vice President joined by secure video teleconference. They advised the President and Vice President that another terror attack in Kabul is likely, but that they are taking maximum force protection measures at the Kabul Airport,” White House Press Secretary Jen Psaki said in a statement Friday.

“They reported that even in the face of those threats, our courageous service women and men are continuing to operate a historic evacuation operation. The U.S. military is airlifting out thousands of people every few hours. They continue to prioritize evacuating the remaining American citizens who have indicated that they wish to leave, and are engaged in a variety of means to get them to the airport safely,” she said in a statement.

“The President directed the Secretary of State to continue diplomatic efforts with international partners to secure means for third-country nationals and Afghans with visas to leave the country even after the U.S. military presence ends,” Psaki stated.

“Our commanders also updated the President and Vice President on plans to develop ISIS-K targets. The next few days of this mission will be the most dangerous period to date. The President reaffirmed with the commanders his approval of all authorities they need to conduct the operation and protect our troops, and all reported back that they have the resources they believe they need to do so effectively,” she added.

When asked to provide more specificity on the threat and what that means for the evacuation efforts and how it may limit or restrict the United States’ ability to get much done with the mission by the Aug. 31st deadline, Psaki told reporters Friday:

I think many of you may have seen the statement I put out this morning, but just to highlight the reference I believe Amer was making, what I conveyed in the statement was national security team the president met with this morning, advised the president and vice president that another terror attack in kabul is likely, and they are taking maximum force protection measures at kabul airport and surrounding areas with our forces, as a result.

I will note that the department of defense also just gave a briefing this morning and I will echo some of the descriptions they offered. The threat is ongoing and active. It is, our troops are still in danger. That continues to be the case everyday that they are there. This is the most dangerous part of the mission.

This is the retrograde period of the mission, and what that means is that this is the period of time when the military, commanders on the ground and forces begin to move, not just troops home, but also equipment home.

That is often a very dangerous part of any mission, but in this case, they’re also doing that while there is an ongoing and acute threat from ISIS-K. So that is what they are facing. I would note, since you gave me the opportunity, that the military made clear to the president that they are committed to continuing this mission, to saving lives, to evacuating more people from the country over the coming days and completing their mission by the 31st.

What it also will mean as they move to this retrograde phase is that there will be a reduction in numbers over the next couple days, and we’ve been putting out those numbers out to all of you twice a day, so that you can see how that — how we are evacuating people out of the country.

Those numbers will go down in the next couple of days and you should anticipate that. That is as a result of the retrograde process that needs to take place, but also I will note that of course force protection is front and center and is vital to the mission.