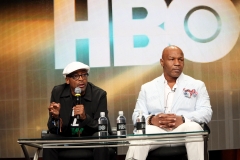 In March 2020, HBO aired a Brian Stelter-produced documentary, “After Truth: Disinformation and the Cost of Fake News,” which typically focused on how a “mainstream media” dedicated to truth had to expose and defeat pro-Trump kooks and grifters such as InfoWars, which claimed the Sandy Hook school shooting was faked.

It’s different for pro-Obama kooks and grifters. In August and September 2021, HBO will air a Spike Lee-produced documentary, “NYC Epicenters 9/11-2021 1/2.” Roughly half of the eight-hour project is about the pandemic; the other half is on 9/11. At the end of an interview, New York Times pop culture reporter Reggie Ugwu noted: “You interview several members of the conspiracy group Architects and Engineers for 9/11 Truth. Why did you want to include their perspective?”

Lee replied, “I got questions,” and he wants a new congressional hearing into the origins of 9/11. Like Rosie O’Donnell, he is implying that the collapse of the twin towers was due to a nefarious Bush-Cheney controlled demolition rather than the impact of the passenger jets. But he claimed, “My approach is [to] put the information in the movie and let people decide for themselves. I respect the intelligence of the audience.”

Ultimately, Ugwu and the Times granted Lee the opportunity to promote his spectacle and his career. When anti-abortion advocates made the movie “Unplanned,” Ugwu insisted, “Of course, no film is entitled to media exposure.” But progressive black filmmakers can count on sympathetic exposure in The New York Times, despite their slogan, “Truth. It’s more important now than ever.”

This isn’t the first time HBO has signed up Spike Lee to promote nutball conspiracy theories. In 2006, they aired Lee’s film on Hurricane Katrina, “When the Levees Broke.” Lee entertained the conspiracy theory that the government blew up the levees. Then-HBO Documentary Films President Sheila Nevins made excuses to NPR: “He’s not reporting, he’s not on camera, he doesn’t have the responsibility to interpret for them. He only has the responsibility to present for them their disillusionment and maybe their slight inaccuracies.”

The government blowing up levees in some kind of racist plot? That’s a “slight inaccuracy”?

Dani Di Placido at Forbes underlined both of these Lee HBO films “have been heavily praised by critics and audiences; neither of the documentaries are defined by their conspiratorial leanings.”

Lee also mangles reality outside of his films. In 2012, he had to pay a couple of terrified senior citizens in Sanford, Fla. for inaccurately retweeting their address in the belief it was the home of George Zimmerman, the vigilante who shot black teenager Trayvon Martin after a violent scuffle.

In effect, Lee resembles a cinematic Al Sharpton — it doesn’t matter what kind of unproven conspiracy theories he’s pushing, or who that hurts. He’s a wealthy black celebrity “down with the struggle,” so all is forgiven over and over again.