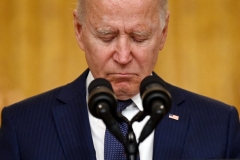 (CNSNews.com) – Rep. Michael Waltz (R-Fla.), a politician with extensive battlefield experience, told Fox News’s Neil Cavuto on Thursday that President Joe Biden “has us in a no-win situation because he started this evacuation so late.”

Waltz said he and others in Congress were pressing Biden to begin pulling U.S. troops and materiel out of Afghanistan “back in April.”

But the Biden administration “didn’t even put a task force together until June, to even begin getting started.”

“So, now he has us in a no-win situation,” Waltz repeated:

Either we stay and continue to take casualties, or we go and we leave thousands of Americans to what I think will be one of the largest hostage situations, mass hostage crisis that we have faced since 1979.

What we need now is bold, decisive leadership. Unfortunately, I don’t think we will get it. But here’s what I would recommend we do.

Number one, you tell the Taliban, the mission is not over until we get every American out. And if you get in our way, we will kill you.

Number two, HKIA, the Kabul International Airport, is not defendable. We cannot continue to take this — these types of casualties. And if we’re committed to getting every American out, that’s untenable. We have to retake Bagram. I was just briefed yesterday that that is a contingency the military is prepared for.

It just takes leadership from this White House. And then, thirdly, we have special operators there as we speak that are raring to go to get into Kabul and even outside of Kabul to go get our Americans, but their hands are being tied by this White House. Authorize them to go do what they’re trained and there to do. And that’s going to rescue our fellow citizens.

Get as many Afghans as we can out. But there are also sanctuaries, pockets of resistance that the Taliban have not taken just north of Kabul. I have spoken to that leadership. And we can create that sanctuary for those American — for those Afghans and those at-risk Afghans that we can’t get out.

They’re ready to accept and they’re ready to defend. Those alone, any of those steps will make the situation far better. But, unfortunately, I think what you’re about to hear from the president is, he’s going to put his foot on the gas to — and he’s going to use this as proof of why his deadline makes sense.

And he’s going to leave Americans behind, Neil. And that is un-American, it’s a tragedy, and he’s letting terrorists dictate the terms.

(Later Thursday, in his speech to the nation, Biden said he asked the military “for their best judgment” on what would be the “most efficient way” to conduct the evacuation mission. “They concluded — the military — that Bagram was not much value-added, and it was much wiser to focus on Kabul. And so, I followed that recommendation.”)

Waltz reminded Cavuto that Biden’s August 31 deadline for ending the U.S. military mission in Afghanistan is “completely made up.”

“And I verified that yesterday, asking — asking a number of officials in a private briefing. This is a self-imposed deadline. There is no way to get the thousands of Americans out, especially now with this attack, that we have to get out.

“What does that mean?” Waltz asked rhetorically:

That means, going forward, on September 1, essentially, their plan is to trust the Taliban to continue to let Americans go, and the Afghans that have worked with us against them for years that we know they’re already hunting down as we speak.

That is — it is a tragedy. It’s inhumane. And it’s — it runs directly counter to our national security, because here’s the other problem. His own intelligence community is repeatedly — has repeatedly briefed us that al Qaeda fully intends to come roaring back.

What will — it will spread like a cancer. What happens in Afghanistan doesn’t stay there. They intend to hit the West again. So are we going to wait until we have another Pulse nightclub or San Bernardino or, God forbid, another 9/11?

And those future soldiers that will have to go back and deal with this new Al Qaeda are going to have to do so with no bases, no local allies, because they have been hunted down, and a terrorist army that’s armed to the teeth with billions of dollars of our own equipment.

I mean, this is — this is incompetent, and it’s outrageous at historic levels, not to mention the credibility around the world that we’re losing the confidence of our other allies. The list just goes on and on and on of why this is such a disaster.

Waltz said he believes Biden will stick to his August 31 deadline because “he’s not listening to the intelligence community. He’s not listening the Pentagon. My fellow lawmakers, Democrats and veterans, tried to call him last night after receiving these briefings. I don’t know if it’s cluelessness or heartlessness or incompetence or all of the above.”

Waltz, the first Green Beret to serve in Congress, has done multiple combat tours in Afghanistan, the Middle East and Africa, earning 4 Bronze Stars and 2 with valor.