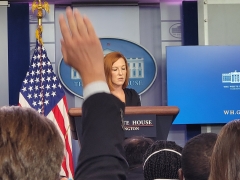 (CNSNews.com) – White House Press Secretary Jen Psaki said Friday that calls for President Joe Biden to resign over his handling of the Afghanistan withdrawal are ill-timed considering that the nation is still reeling from the suicide bomb attack that killed 13 U.S. soldiers in Kabul.

CBS News White House Correspondent Nancy Cordes asked Psaki, “I want to know if the white house has any reaction to the swath of Republican lawmakers who are calling on the president to resign over this?”

“Well, Nancy, I have to say that seeing some of those occur or be called for or be put out on Twitter, the backdrop here is the U.S. men and women of the military deployed on the ground are bravely continuing to implement a mission to save lives on the ground: American citizens, Afghan partners, many people that some of these same individuals are calling for us to evacuate,” Psaki said.

“Yesterday they lost 13 of their own. The president made absolutely clear that we are going to hunt down, go after and kill the terrorists who are responsible. Everyone should be supportive of that,” she said.

“So you’re saying now is not the time for politics,” Cordes asked.

As CNSNews.com previously reported, Rep. Mark Green (R-Tenn.) is just one of the members of Congress calling for Biden to step down as president.