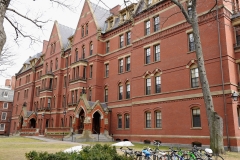 Although Harvard University was established in 1636 to train men to be literate and well-educated Protestant clergymen, the new chief chaplain at the school is Greg Epstein, a dedicated atheist.

Epstein, who was raised in a Reformed Jewish household, is an ordained Humanist Rabbi. He also holds a B.A. in religion and an M.A. in Judaic studies from the University of Michigan-Ann Arbor, and a Masters of Theological Studies degree from the Harvard Divinity School.

Epstein has been the Humanist Chaplain at Harvard since 2005, and he serves in a similar capacity at MIT. He was elected to head the chaplains at Harvard this week.

He tweeted on Thursday, “I’m obliged and honored to share personal news: I’ve been elected president of my @HarvardChaplain colleagues, and the brilliant @emmabgo wrote about it for the @nytimes. Will add a [thread symbol] here, later today. ‘The New Chief Chaplain at Harvard? An Atheist.'”

As chief chaplain, Epstein will “coordinate the activities of more than 40 university chaplains, who lead the Christian, Jewish, Hindu, Buddhist and other religious communities on campus,” reported The New York Times.

“There is a rising group of people who no longer identify with any religious tradition, but still experience a real need for conversation and support around what it means to be a good human and live an ethical life,” Epstein told The Times.

“We don’t look to a god for answers,” he said. “We are each other’s answers.”

One woman who went to Epstein for advice, as mentioned in The Times, is Adelle Goldenberg, 22, who grew up in a Hasidic Jewish community.

Epstein “showed me that it’s possible to find community outside a traditional religious context, that you can have the value-add religion has provided for centuries, which is that it’s there when things seem chaotic,” said Goldenberg.

Talking to her mother about her experiences at Harvard, Goldenberg noted that her mother asked to look at her university yearbook. Goldenberg told her, “I don’t think you’re going to like it. It says I was co-president of the Harvard Humanists, Atheists and Agnostics. And you can see my shoulders.”

Epstein, 44, is the author of the NYT best seller Good Without God: What a Billion Nonreligious People Do Believe. A blurb on the back cover states that Epstein “highlights humanity’s potential for goodness and the ways in which Humanists lead lives of purpose and compassion. Humanism can offer the sense of community we want and often need in good times and bad—and it teaches us that we can lead good and moral lives without the supernatural, without higher powers . . . without God.”

Epstein is also the national chairman of Humanists for Biden, which describes itself as “An initiative of nonreligious people—humanists, atheists, agnostics, and others—proud to stand with Joe Biden and Kamala Harris.”

In the beginning, Harvard University’s motto was “Truth for Christ and the Church.”

Its motto today is “Truth” — “for Christ and the Church” has been removed.