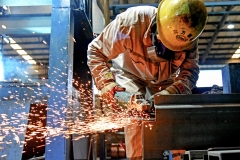 (CNS News) — In its latest survey on economic confidence, Gallup found that 60% of adults believe the U.S. economy is “getting worse” while only 37% think it is “getting better.”

The Index hit a low point in April 2020 of negative 33, apparently because of the effects of the COVID pandemic.

“The decline in confidence appears likely tied to the recent increase in coronavirus infections,” reported Gallup.  “The August survey found the percentage of Americans naming COVID-19 as the most important problem facing the country doubling, and it is once again the top overall problem mentioned.”

“The pandemic has brought a number of shocks to the U.S. economy,” said the survey firm.  “The recovery from widespread business shutdowns in the spring of 2020 has been solid at times and uneven at others. Currently, the economic growth as measured by gross domestic product is healthy, the unemployment rate is decreasing and stock values are at record levels.”

“At the same time, the U.S. is still well short of the number of jobs it had before the pandemic, and employers are struggling to fill the openings they do have,” said Gallup.

Another major factor potentially affecting economic confidence, but not mentioned as meaningful by respondents in Gallup’s survey, is inflation.

On July 11, the Wall Street Journal reported that, “Americans should brace themselves for several years of higher inflation than they’ve seen in decades, according to economists who expect the robust post-pandemic economic recovery to fuel brisk price increases for a while.”

“Higher inflation for several years would ripple through the economy in various ways,” said The Journal. “Consumers could find their household budgets squeezed. Higher borrowing costs could weigh on stock values and could crimp growth in interest-rate-sensitive industries like housing. Higher inflation can also make it harder for businesses to plan longer-term investments.”

Kevin Swift, chief economist at the American Chemistry Council, told The Journal, “It’s disruptive — you can’t be sure of what your costs are, whether you can get supplies or what the costs will be six months from now.”

“I’d hate to be in the construction business trying to bid on a job when you don’t know what the cost of steel will be 18 months from now,” said Swift.