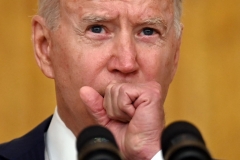 President Joe Biden pauses as he delivers remarks on the terror attack at Hamid Karzai International Airport, and the US service members and Afghan victims killed and wounded, in the East Room of the White House, Washington, DC on August 26, 2021. (Photo by JIM WATSON/AFP via Getty Images)

(CNSNews.com) – President Joe Biden vowed Thursday to hunt down the terrorists responsible for carrying out the suicide bombing attacks that killed at least 12 U.S. soldiers in Afghanistan, saying, “We will hunt you down and make you pay.”

“To those who carried out this attack, as well as anyone who wishes America harm, know this: We will not forgive.  We will not forget.  We will hunt you down and make you pay.  I will defend our interests and our people with every measure at my command,” BIden said.

“Over the past few weeks — I know you’re — many of you are probably tired of hearing me say it — we’ve been made aware by our intelligence community that the ISIS-K — an arch-enemy of the Taliban; people who were freed when both those prisons were opened — has been planning a complex set of attacks on the United States personnel and others,” he said.

“This is why, from the outset, I’ve repeatedly said this mission was extraordinarily dangerous and why I have been so determined to limit the duration of this mission,” the president said.

When asked Thursday whether he is prepared to add additional military forces inside Afghanistan to protect Americans carrying out the evacuation operation, Biden said he would grant it.

“Mr. President, you have said leaving Afghanistan is in the national interest of the United States.  After today’s attack, do you believe you will authorize additional forces to respond to that attack inside Afghanistan? And are you — are you prepared to add additional forces to protect those Americans who remain on the ground carrying out the evacuation operation?” NBC White House Correspondent Kelly O’Donnell asked.

“I’ve instructed the military, whatever they need — if they need additional force — I will grant it, but the military — from the Chairman of the Joint Chiefs, the Joint Chiefs, the commanders in the field — have all contacted me one way or another, usually by letter, saying they subscribe to the mission as designed to get as many people out as we can within the timeframe that is allotted,” Biden said.

“That is the best way, they believe, to get as many Americans out as possible, and others, and with regard to finding, tracking down the ISIS leaders who ordered this, we have some reason to believe we know who they are — not certain — and we will find ways of our choosing, without large military operations, to get them,” he said.

“Wherever they are,” the president said.