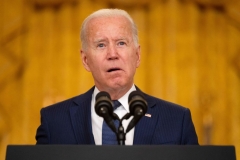 President Joe Biden delivers remarks on the terror attack at Hamid Karzai International Airport, and the US service members and Afghan victims killed and wounded, in the East Room of the White House, Washington, DC on August 26, 2021. (Photo by JIM WATSON/AFP via Getty Images)

(CNSNews.com) – Rep. Mark Green (R-Tenn.), who served in Afghanistan and Iraq, told Fox News on Thursday that President Joe Biden has messed up the Afghanistan withdrawal so badly that at this point, the best thing for him to do is to step aside or have his cabinet remove him from office.

Green said that his contacts on the ground in Afghanistan are telling him that “there’s still direct fire engagements going on” in the wake of the suicide bomb attacks in Kabul that killed a dozen U.S. servicemembers.

“So I’m sure this situation is evolving and may probably before he gets up and says something to the nation wants to know exactly what’s happening, so I’m not sure that the engagement has actually ended over there right now from what I’m hearing,” the congressman told Fox News’s “America Reports.”

“Yeah, Joe Biden’s been absent, won’t take questions, and is basically, being deceptive with the nation with what is going on over there. So, I don’t know what to expect from him, but I agree 100% this is a chance to basically say the Taliban failed, so this August 31st is out the window. We’re going to secure every American and get them out of there. It’s a reset opportunity and hopefully, the president takes it,” he said.

When asked how Biden should respond, Green said, “I think that the president of the United States should come out and say, ‘all bets are off. The Taliban have absolutely defied this agreement by not securing– they didn’t keep their promise to secure the access routes to the airfield. We are going to expand this operation.’ I’d put more military in there. I’d get every single American out, and I’d start killing bad guys.”

“His secretaries of defense, state come out and contradict things that he says all of the time whether it’s the Afghans don’t want to leave or they don’t want to fight or oh, nobody told me it was a bad idea to withdraw. All of these things are false,” the congressman said.

Green said that the U.S. military should find another way to get people out of Afghanistan besides the Kabul airport, possibly by flying people out of the Bagram airport.

“We’ve talked a lot about Bagram in the last few days, so now the enemy’s probably thinking about that too, and who knows what they’re doing to Bagram right now, but I think somewhere, and we shouldn’t probably telegraph where it’s going to be. We should open up sort of a second front on this thing, spread the enemy out, have other runways accessible,” Green said.

“I think that’s probably the smartest thing to do. I’m not necessarily at this point — going back into Bagram could be very expensive because we’ve basically telegraphed that for several days,” the congressman said.

“And I’ve been really frustrated with Secretary Blinken, because he’s out there basically saying, well they haven’t called us back, so they must not want to leave. I think that’s a little bit flippant and unsettling to me,” he said.

Fox News host John Roberts asked whether people who are not inside the airport right now are basically out of luck.