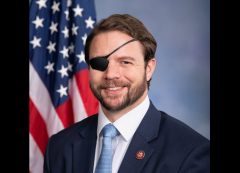 Commenting on the terrible attacks in Kabul, Afghanistan, which killed at least 12 U.S. soldiers, House Rep. Dan Crenshaw (R-Texas) said that President Joe Biden does not understand Islamist terrorism, that he chose the “stupidest possible option” for exiting Afghansitan, and now we are paying the price in blood.

“We have to acknowledge that there are people out there that want to kill us, that wake up every single day, and if they have any space whatsoever, any room, any time whatsoever, they’re planning an attack on the homeland,” said Crenshaw, a former Navy SEAL.

“Every president since Bush has had to deal with this really difficult decision – Obama, Trump,” said Crenshaw. “But Biden is the only one who really followed through with the stupidest possible option. And now we’re paying in blood for it.”

Crenshaw served in the Navy from 2006 to 2016, assigned to SEAL Team 3. He served five tours of duty, including in Afghanistan and Iraq, and rose to the rank of lieutenant commander. He was awarded the Purple Heart and two Bronze Stars.