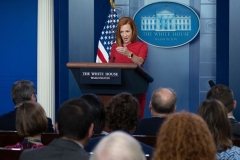 (CNSNews.com) – White House Press Secretary Jen Psaki said Thursday that the United States is not friends with the Taliban and does not trust the Taliban, but because of U.S. coordination with the Taliban, they’ve been able to get 104,000 people out of Afghanistan.

“General McKenzie described this– one of the explosions at the Abbey Gate happening at a point after someone had been searched by the Taliban. How is the United States still going to work with the Taliban in the way that the president is describing or just did in his remarks to get American citizens and Afghan allies out if that is what we’re working with?” Fox News White House Correspondent Peter Doocy asked.

PSAKI: I’m not trying to sugarcoat what we think of the Taliban. The Taliban is not, they are not a group we trust. They are not our friends. We have never said that.

It is also the reality that the Taliban controls large swaths of Afghanistan and to date, because of coordination with the Taliban, we’ve been able to evacuate more than 104,000 people, save 104,000 lives, and that coordination is necessary in order to continue our evacuation measures.

Now I understand your question, Peter, and the questions of others on what they knew or what their role was. There’s no assessment we have at this point in time of their involvement in this. Obviously, that’s at this time. If that changes, we will let you all know.

DOOCY: Does the president really think that they’re going to be reliable partners if we’re already getting reports that they’re not letting Afghans into the airport, and the U.S. is still at the airport?

PSAKI: You mean after the 31st or moving over to the next couple of days?

DOOCY: We’ve heard it’s already happening, so does he think that’s going to get —

Again, this is not about trust. This is not about relying on the Taliban as an equal partner. No one is suggesting that, but because they control large swaths of the country, including a lot of the security perimeters around the airport, we have to coordinate with them in order to get people out, and we’ll continue to do that.

One more thing I would say is that we have an enormous amount of leverage – this is our view, over time. That includes economic leverage. That includes leverage that we will make clear to the Taliban as it relates to coordination continuing to get American citizens and our partners out.