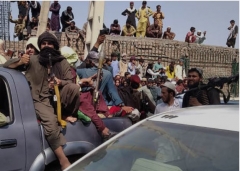 “We were devoid of a fundamental understanding of Afghanistan,” Douglas Lute, who coordinated Afghan strategy at Obama NSC told the IG in a February 20, 2015 interview.

“We didn’t know what we were doing,” Lute said.

“We didn’t have the foggiest notion of what were undertaking…It’s really much worse than you think,” Lute said.

The passage from the IG’s report that includes these remarks from Lute is as follows:

‘We were devoid of a fundamental understanding of Afghanistan. We didn’t know what we were doing. … We’re going to do something in Afghanistan with $10 billion? Haiti is a small country in our own backyard with no extremist insurgency and we can’t develop it. And we expect to develop Afghanistan with $10 billion? … What are we trying to do here? We didn’t have the foggiest notion of what we were undertaking. … It’s really much worse than you think. There [was] a fundamental gap of understanding on the front end, overstated objectives, an overreliance on the military, and a lack of understanding of the resources necessary.’”

(This is a screen capture from the report of the Special Inspector General for Afghanistan Recontstruction.)

The IG’s report went on to say: “In other words, U.S. officials not only had a poor understanding of Afghanistan, but also of their own institutions, which meant the Afghanistan mission’s ends, ways, and means would inevitably be misaligned over the course of the wary.”