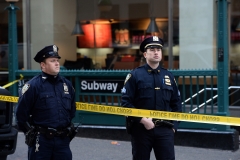 If NYC Mayor Bill DeBlasio (D) tries to impose a COVID vaccination mandate on on the city’s largest police union, the Police Benevolent Association (PBA), it will sue to stop the requirement.

“If the City attempts to impose a vaccine mandate on PBA members, we will take legal action to defend our members’ right to make such personal medical decisions,” PBA President Patrick Lynch said in an email that was obtained by The New York Post.

So far, the left-wing DeBlasio has not ordered the COVID vaccine shot for all public employees. However, he has imposed it on all New York City public school teachers and administrators.

“As of this writing, the City has not indicated whether it will attempt to impose vaccine mandates on other city workers, including police officers,” said Lynch.

According to The Post, approximately 47% of the New York Police Department, in uniform and civilians, are vaccinated against COVID.

In December 2020, Police Commissioner Dermot Shea said the vaccination would not be mandatory for members of the NYPD.

“The Police Benevolent Association of the City of New York (NYC PBA) is the largest municipal police union in the world,” according to its website. “The NYC PBA represents the approximately 24,000 sworn NYPD members who hold the rank of Police Officer and wear a silver shield … the front-line police officers in radio cars and on foot posts in your neighborhood, as well as those in specialized units and administrative divisions throughout the city.”