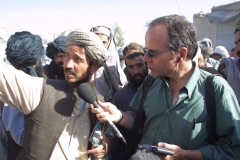 A majority of American voters don’t trust what the media’s telling them about the current situation in Afghanistan and believe the actual situation is worse than the media are reporting, a new Rasmussen survey shows.

Likewise, while 57% say the actual state of the country is “worse than it is being portrayed in news media coverage,” only 26% say it’s “about the same” as the media are portraying it. Eleven percent believe the situation is actually better than reported and seven percent aren’t sure what to think.

Democrats are the most likely to believe what the media’s telling them (42%). Still, they are more than twice as likely to say the situation is worse than reported (38%) as they are to think it’s better (17%) than they’re being told it is. Thirty-six percent of Democrats say the news they’re getting is accurate and another nine percent aren’t sure.

In the case of cable news, only 22.3% of airtime is devoted to presenting hard news, while the rest consists of discussion and commentary, a new study by the Media Research Center’s NewsBusters analysts reveals.

Voters’ trust in the Biden Administration’s claims about Afghanistan mirrors that of their trust of the media, with a majority (54%) saying they do not believe what they’re being told and 34% expressing faith in the administration’s portrayal of the situation.

Voters are more than five times as likely (60%-11%) to think the true state of affairs is worse, rather than better, than the Biden Administration is saying. One in four (25%) say it’s “about the same.”

Again, Democrats (60%) are the most likely to trust the administration’s portrayal of the circumstances in Afghanistan, but 34% say it’s actually worse than claimed, 18% believe it’s better and 42% have faith that it’s accurate.