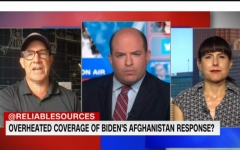 As the Biden Administration’s withdrawal of the U.S. from Afghanistan unfolds as a deadly humanitarian disaster, MSNBC and CNN continue to defend and praise the botched operation, even though most Americans don’t trust the media’s overly-positive portrayal of the situation.

Despite the Biden Administration’s “catastrophic policy blunders,” MSNBC, CNN and their guests “continue to dig in their heels and insist that things in Afghanistan are proceeding in an acceptable, even praiseworthy fashion,” NewsBusters analyst and Media Editor Bill D’Agostino reports.

As D’Agostino notes, MSNBC’s ReidOut Host Joy Reid has tried to distract viewers from Biden’s failure by attacking the Trump Administration’s handling of the coronavirus pandemic and Republicans’ approval of Trump’s decisions regarding Afghanistan.

Over at CNN, Reliable Sources’ Host Brian Stelter has tried to defend Biden by attacking the media outlets that have reported unfavorably about the handling of the withdrawal from Afghanistan:

Still, results of a Rasmussen Reports survey of U.S. likely voters released Thursday reveal that Americans are seeing through any media efforts to put a positive spin on Biden’s handling of the situation in Afghanistan.

Only 29% say they “trust what the news media are reporting about the current situation in Afghanistan,” while a majority of 53% say they do not.

Likewise, while 57% say the actual situation in Afghanistan is “worse than it is being portrayed in news media coverage,” only 26% say it’s “about the same” as the media claim it to be.

In the case of cable news, only 22.3% of airtime is devoted to presenting hard news, while the rest consists of discussion and commentary, a new study by the Media Research Center’s NewsBusters division reveals.