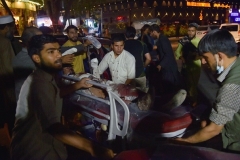 Medical staff and volunteers bring an injured man for treatment after Thursday’s suicide bombings outside the Kabul airport. (Photo by Wakil Kohsar/AFP via Getty Images)

(CNSNews.com) – The U.S. military and Taliban “share a common purpose” built around the August 31 target date for the Kabul airport evacuation operation to end, and there is no indication the Taliban allowed Thursday’s deadly suicide bombing to take place, in the view of Central Command commander Gen. Kenneth McKenzie.

“Do you still trust the Taliban and is it possible that they let this happen?” McKenzie was asked while briefing reporters at the Pentagon remotely on the attack, which cost the lives of 12 U.S. service members and injured another 15.

“As to whether or not they [the Taliban] let it happen, I don’t know,” he replied. “I don’t think there’s anything to convince me that they let it happen.”

“As to whether or not I trust them, that’s not necessarily – it’s a word I use very carefully. You’ve heard me say before, it’s not what they say, it’s what they do,” McKenzie said.

The administration has been warning for days about the threat posed to the U.S.-led evacuation mission at Kabul airport by the Afghanistan affiliate of ISIS, known as ISIS-Khorasan (ISIS-K).

McKenzie said the suicide bombers were “assessed to have been ISIS fighters,” and the group has claimed responsibility for the attack, which also killed and wounded scores of Afghan civilians.

Asked how he thought the terrorists made it through checkpoints manned by the Taliban to reach the targeted Marines, McKenzie said he did not know but agreed that it constituted a “failure.”

“Clearly if they were able to get up to the Marines that were screening at the entry point to the base, there was a failure somewhere,” he said. “It was a failure by – Taliban operate at varying degrees of competence. Some of those guys are very scrupulously good, some of them are not.”

“I just don’t know the answer to that question,” McKenzie continued. “But we will – you can be assured we’re going to continue to take a look at it and try to make all our practices better as we go forward.”