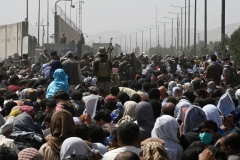 Afghans gather on a roadside near the military part of the airport in Kabul on August 20, 2021, hoping to flee from the country after the Taliban’s military takeover of Afghanistan. (Photo by WAKIL KOHSAR/AFP via Getty Images)

(CNSNews.com) – Asked to explain why President Joe Biden “joked” about Americans stranded in Afghanistan past the Aug. 31 deadline, White House Press Secretary Jen Psaki said Wednesday that negotiations with the Taliban and coordinating the evacuation of all Americans and Afghan allies from the region are “incredibly serious issues.”

Fox News White House Correspondent Peter Doocy asked about the president’s smirk at the end of his remarks at a White House meeting on improving the nation’s cybersecurity on Wednesday.

During Wednesday’s White House press briefing, Doocy asked Psaki, “At the tail end of the president’s remarks today about cybersecurity, he was asked about Afghanistan, and he made a joke.”

PSAKI: I think Peter asked him that question.

DOOCY: The other Peter did, and he made a joke, so what’s so funny?

PSAKI: I think the question he was asked, if I remember correctly, was about when he will provide information about a decision on August 31st. I don’t want to paraphrase the question if that was an inaccurate description of the question.

DOOCY: Very important to a lot of people.

PSAKI: Of course it’s a very important question, and I think what he conveyed is that, he has not — well what I can convey from here I should say is that as he stated yesterday, and as the secretary of state just stated, we’re on track to complete our mission by August 31st. Obviously, there are discussions, and the president received a briefing just this morning. As I noted, he asked yesterday for contingency plans, and he received a briefing on them this morning.

These are incredibly serious issues, and there are discussions that are happening internally, and I’d note that in addition to the contingency plans that he requested, he also, I will reiterate, as we stated yesterday that this is all contingent on us achieving our objectives and the continued coordination with the Taliban.

And the president has spoken I would say to this issue, Peter as you know. You’ve been— attended a number of these multiple times over the last several days, and he has also highlighted the fact that we are closely watching, closely following the threats from ISIS-K, which he also received a briefing on this morning.