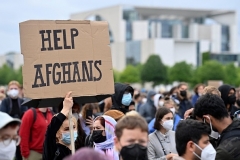 Berlin (CNSNews.com) – As Western allies scramble to evacuate troops and staff from Afghanistan by President Biden’s August 31 cutoff date, German Chancellor Angela Merkel said that her country is working “intensively” to evacuate to evacuate the remaining German citizens as well as Afghan staff ahead of the deadline.

Acknowledging that not everyone who wants to get out will be able to leave by month’s end, Merkel said Germany would continue trying to help Afghans who worked with its soldiers and aid organizations to leave the country even after the deadline.

“The end of the air bridge in a few days must not mean the end of efforts to protect Afghan helpers and help those Afghans who have been left in a bigger emergency with the takeover of the Taliban,” she told lawmakers in the Bundestag on Wednesday.

“That’s why we are working intensively at all levels to find how we can protect those who helped us, including through the civilian operation of the airport in Kabul,” she said.

Merkel called for dialogue with the Taliban, admitting the “new reality is bitter, but we have to deal with it.”

“Our goal now must be to retain as much of the change we achieved in terms of changes in Afghanistan.”

At an emergency G7 virtual meeting a day earlier, Biden ruled out extending the deadline for evacuations beyond August 31.

So far, the German armed forces have flown more than 4,600 people out of Kabul, according to the defense ministry.

Shortly after Merkel addressed lawmakers, the German government’s envoy for Afghanistan, Markus Potzel, reported that during negotiations with the Taliban, the group had undertaken to allow Afghans with “legal documents” to leave the country, even after August 31.

“Met [deputy director of the Taliban’s political office] Sher Abbas Stanekzai and his team for a comprehensive discussion in Doha yesterday,” Potzel tweeted. “We talked about the urgent need for a functioning airport in Kabul as a prerequisite for diplomatic & non-governmental organizational presence in Afghanistan.”

“Director Stanekzai assured me that Afghans with legal documents will continue to have the opportunity to travel on commercial flights after 31 August,” he added.

Taliban spokesman Zabihullah Mujahid told a press conference in Kabul earlier “we will not allow” Afghans to leave after the end of the month.

The scheduled withdrawal of U.S. and coalition forces after a 20-year presence was almost complete when the Taliban unexpectedly seized Kabul after President Ashraf Ghani fled on August 15, forcing allies to fly troops back in to carry out a massive evacuation effort at Kabul airport.

Ahead of Tuesday’s G7 meeting, German Foreign Minister Heiko Maas warned that the government may fail to evacuate all those it wants to get out, in time.

“Even if the deadline is August 31 or is extended by a few days, it will not be enough to evacuate those we want to evacuate and those that the United States wants to evacuate,” Maas told the Bild newspaper.

Maas said 540 German citizens had already been flown out, and that there were around 100 more on site. But the Foreign Office on Wednesday revised this number upward to more than 200 .

A total of 150,000 German troops served in Afghanistan since 2001, according to the defense ministry. At its peak, Germany had 4,700 troops deployed in 2012, and up to 1,300 soldiers last March, before the final drawdown began. The last group of 264 soldiers returned to Germany on June 30.

Fifty-nine German soldiers were killed during the 20-year operation.

Maas said Germany was discussing with Pakistan, Uzbekistan, Tajikistan, and India about allowing Afghans who helped allied forces, and had fled across the borders into those neighboring or nearby countries, to reach German embassies.

Merkel said earlier Germany could grant asylum to up to 10,000 Afghans, though the topic will continue to be one of significant debate, among not only German lawmakers but in Europe broadly as E.U. member-states wrangle over a common migration policy.

Ahead of next month’s federal election, opposition leaders slammed the government.

Green party leader and candidate for chancellor, Annalena Baerbock, decried what she called a “foreign policy disaster.”  Dietmar Bartsch, head of the Left party, called the Afghanistan operation the “lowest point” in Merkel’s 16 years as chancellor.

Defense Minister Annegret Kramp-Karrenbauer assigned some blame to the International Organization for Migration, saying in a letter to lawmakers that the IOM “could not provide the contractually promised service [to help evacuate people] due to the deteriorating overall situation on site.”

Greens’ foreign policy spokesman Omid Nouripour rejected that, however, saying the government should bear a share of the responsibility for the fact that people have not been able to leave the country.

“That the federal government is now trying, for example through the Federal Defense Minister, to attribute part of its own failure by unloading it onto the IOM is a see-through blame game,” he said.