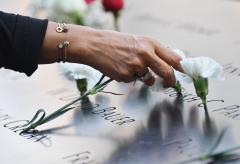 A mourner places flowers at the 9/11 Memorial & Museum in New York on September 11, 2020, as the U.S. commemorates the 19th anniversary of the 9/11 attacks. (Photo credit: ANGELA WEISS/AFP via Getty Images)

The commercial aircraft that al-Qaeda terrorists flew into the twin towers, the Pentagon, and a field in Pennsylvania on Sept. 11, 2001 — killing 2,977 people — did not take off from some foreign land before flying toward targets here in the United States.

American Airlines Flight 11, which struck the north tower of the World Trade Center, took off from Boston and was heading to Los Angeles.

United Airlines Flight 175, which struck the south tower of the World Trade Center, also took off from Boston and was heading to Los Angeles.

American Airlines Flight 77, which struck the Pentagon, took off from Northern Virginia and was heading to Los Angeles.

United Airlines Flight 93, which crashed in Pennsylvania, took off from Newark and was heading to San Francisco.

Almost three years after the 2001 attacks, the staff of the national commission that Congress created by statute to investigate the event published a report on “9/11 and Terrorist Travel.”

This report began by making a fundamental point: “It is perhaps obvious to state that terrorists cannot plan and carry out attacks in the United States if they are unable to enter the country.”

We let the hijackers in. But did they come here legally? Did they follow our visa and immigration laws? Not according to this 9/11 Commission staff report.

“The story begins with ‘A Factual Overview of the September 11 Border Story,'” says the preface to the report. “In it, we endeavor to dispel the myth that their entry into the United States was ‘clean and legal.’ It was not.”

More than two dozen al-Qaeda terrorists whom the commission associated with the 9/11 conspiracy tried to enter the United States. Most of them succeeded.

“Twenty-six al-Qaeda terrorist conspirators — eighteen Saudis, two Emiratis, one Egyptian, one Lebanese, one Moroccan, one Pakistani, and two Yemenis — sought to enter the United States and carry out a suicide mission,” said the commission’s staff report. “The first of them began to acquire the means to enter two years and five months before the 9/11 attack.”

“The 19 hijackers applied for 23 visas and obtained 22,” said the report. “Five other conspirators were denied U.S. visas. Two more obtained visas but did not participate in the attack for various reasons.”

One thing these terrorists tended to have in common when they applied for visas to enter the United States was a newly minted passport.

“Most of the hijackers applied with new passports, possibly to hide travel to Afghanistan recorded in their old ones,” said the report.

The terrorists who actually piloted the hijacked planes had another thing in common. This was a remarkable ability to enter, leave, and re-enter the United States.

Ziad Jarrah, who flew United Airlines Flight 93, which crashed in Pennsylvania, “was the most frequent border crosser, entering the United States seven times.”

Had they only let this terrorist into the United States six times, he would not have been on that flight.

Had they only let these terrorists in twice, they would not have flown into the twin towers.

Hani Hanjour, who flew American Airlines Flight 77 into the Pentagon, had made repeated journeys to the United States in the 1990s before coming back as a student — who never went to school — in 2000.

“Hani Hanjour was the only hijacker to enter on an academic visa, arriving on December 8, 2000,” said the report. “He had already attended both English and flight training schools in the United States during three stays in the 1990s. Hanjour was also the only pilot who already had a commercial pilot’s license prior to entry, having acquired it in 1999 in Arizona.”

“Hanjour did not attend school after entering on a student visa in December 2000, thereby violating his immigration status and making him deportable under 8 U.S.C. 1227(a)(1)(B),” said the report.

He, of course, was not deported.

This staff report concluded that “all of the hijackers violated some aspect of U.S. immigration law.”

The good news is that our government has succeeded for nearly two decades in preventing another terrorist attack like 9/11. The question now: Will it continue to do so?

Terence P. Jeffrey is the editor in chief of CNSnews.com.