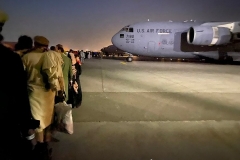 Afghans and others line up to board a U.S. military aircraft in Kabul. (Photo by Shakib Rahmani/AFP via Getty Images)

(CNSNews.com) – After President Biden rejected G7 allies’ request for an extension to the evacuation mission in Kabul beyond August 31, British Prime Minister Boris Johnson tried to put a brave face on the situation, saying the group of leading industrialized powers will use its economic leverage to pressure the Taliban into allowing those Afghans who want to leave to do so freely, even after the troops have gone.

“The number one condition we’re setting as G7 is that they’ve got to guarantee, right the way through – through August 31 and beyond – safe passage,” he said after the G7 virtual meeting. “Safe passage for those who want to come out.”

“Now someone will say that they don’t accept that, and some of them I hope will see the sense of that,” Johnson continued, “because the G7 has very considerable leverage, economic, diplomatic and political.”

Johnson, who holds the G7 presidency, had gone into Tuesday’s meeting hopeful Biden would agree to extend the time for the massive evacuation of U.S. and allies’ citizens and at-risk Afghans beyond month’s end.

“We are currently on a pace to finish by August the 31st,” Biden said at the White House on Tuesday afternoon. “The sooner we can finish, the better. Each day of operations brings added risk to our troops.”

He did add, however, that he has asked the departments of State and Defense to provide “contingency plans to adjust the timetable, should that become necessary.”

Biden said nothing about differences over the August 31 deadline, but characterized the G7 allies as being united, using words like “solidarity” and “strong agreement,” and saying allies were standing “shoulder-to-shoulder” and were “locked at the hip.”

Allies were diplomatic and matter-of-fact about Biden’s determination to stick to the deadline.

“I can confirm that several leaders during the G7 meeting have expressed concerns about this timing, the 31st of August, and we also had the opportunity to express our opinion on that,” European Council president Charles Michel told reporters in Brussels after the meeting, in which he also participated.

“I don’t intend to speak on behalf of the president of the United States, but we had the opportunity to exchange views about this topic.”

Michel also said he had heard from some prime ministers and heads of state of European Union member-states that for them it was also “very important to try to extend this timing.”

“The president of the United States did not announce any new dates beyond August 31 today,” Merkel observed after the meeting.

She stressed that the U.S. was leading the evacuation and that “without the U.S., other nations couldn’t continue the evacuations. We need to recognize that.”

The German military said Tuesday it has evacuated more 4,650 German citizens, citizens of other countries, and Afghans from Kabul. According to the French foreign ministry, French forces have evacuated nearly 100 French nationals and more than 1,500 Afghans since the operation began.

Johnson said U.K. forces have evacuated more than 9,000 people on 57 flights, “and we will go on right up until the last moment that we can.” 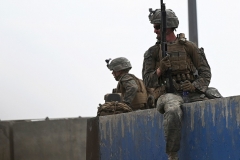 Biden said in his remarks on Tuesday that the U.S. has “helped evacuate 70,700 people” from Kabul since August 14, although those figures appear to include people evacuated by other allies on “coalition aircraft” as well.

For days reporters have been asking the Pentagon, State Department and White House to provide the number of U.S. citizens among those evacuated since mid-August, but got nothing more definite that several thousand.

On Tuesday, the Pentagon put the number at approximately 4,000 U.S. passport holders.

Biden said he has asked Secretary of State Antony Blinken to provide an update on Wednesday on “exactly how many Americans are still in Afghanistan, and how many we got out, and what our projection is.”

“There’s no possible way that we can get every American that’s still in Afghanistan out in the next seven days,” House Minority Leader Kevin McCarthy (R-Calif.) told reporters on Tuesday, after attending a classified briefing.

“At no time should America ever bend or allow the Taliban to tell us when we have to stop bringing Americans out. We should stay until every single American is able to get out of Afghanistan. We should use every recourse possible to make that happen.”

“We should not negotiate it,” McCarthy added. “We should explain that this is what’s going to happen, and anybody in our way to stop us from bringing Americans out will be in danger.”

“Damn the deadline,” said Sen. Ben Sasse (R-Nebr.).  “The American people are not going to surrender our fellow citizens to the Taliban,” he said. “Americans want us to stay until we get our people out, and so do our allies.”

With the August 31 target date now all but confirmed by Biden, the clock is ticking on the number of evacuation flights that can still be carried out before the almost 6,000 U.S. forces at the Kabul airport as well as those of allied countries – Britain has around 1,000 troops there – must themselves be withdrawn.

Pentagon press secretary John Kirby confirmed on Tuesday that the plan was to pull out all of the U.S. troops, agreeing when a reporter asked whether they would “go to zero.”