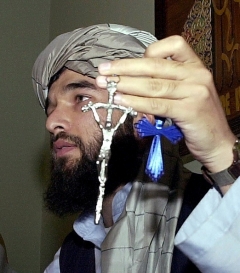 During its previous rule in Afghanistan the Taliban shut down Christian humanitarian NGOs. In this photo, taken a week before the 9/11 attacks, Taliban official Rahmatullah Hashmi holds up a small crucifix found at the Kabul offices of one of the NGOs whose staff it had expelled. (Photo by Saeed Khan/AFP via Getty Images)

(CNSNews.com) – An independent statutory religious freedom watchdog called on the Biden administration Monday to broaden the priority designation for Afghan refugee admissions to explicitly cover religious minorities “at extreme risk of persecution by the Taliban.”

“The Taliban’s imposition of their harsh and strict interpretation of Sunni Islam in the areas that they have taken over poses a grave threat to all Afghans of differing interpretations and other faiths or beliefs,” said U.S. Commission on International Religious Freedom Chair Nadine Maenza.

“As Afghans are forced to flee their homes on account of their beliefs, the U.S. government must ensure that the most vulnerable among them have a pathway to seek refuge in the United States,” she said.

The State Department earlier this month announced it was expanding access to the refugee admission program for Afghans determined to be eligible “by virtue of their circumstances and apparent need for resettlement.”

Many of the Afghans who worked for the U.S. over the past 20 years are already eligible under the Congress-created Special Immigrant Visa (SIV) program to resettle in the U.S.

The new Priority 2 (P-2) designation applies to those who don’t meet the minimum time-in-service requirement for the SIV program, but were employed by the U.S. government or armed forces.

Also eligible are Afghans employed by U.S. government-funded program or project, or employed in Afghanistan by a U.S.-based media or non-governmental organization.

But the USCIRF wants the administration to expand the eligibility to cover those escaping religious persecution.

“We urge the Biden administration to take immediate action to broaden the recent P-2 designation to explicitly include Afghan religious minorities, in recognition of the severe risks they already face, which will only heighten after the end of the U.S. evacuation,” said USCIRF commissioner Frederick A. Davie.

(Of note was the fact the call came from two members of the commission associated with opposite ends of the political spectrum. Maenza, president of former Sen. Rick Santorum’s conservative organization Patriot Voices, was appointed to USCIRF by President Trump; Davie, executive vice president of the Union Theological Seminary in New York who served on the Obama White House Council on Faith-based and Neighborhood Partnerships, was appointed by Senate Majority Leader Chuck Schumer.)

Many non-Muslim Afghans fled during the civil war or after the Taliban seized control of most of Afghanistan in the 1990s, and 99.7 percent of the population today is estimated to be Muslim.

Most are Sunnis, although 10-15 percent are Shi’a, including Ismailis. During the Taliban’s previous rule, members of the Shi’a Hazara minority were labeled heretics and persecuted. 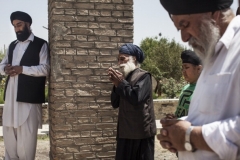 Afghanistan ranks number two – after North Korea – on the annual Open Doors watchlist of “countries where it is most dangerous to follow Jesus.”

“It’s a heartbreaking day for the citizens of Afghanistan and an even more dangerous time to be a Christian,” Brother Samuel, the organization’s field director for Asia, said of Kabul’s fall to the Taliban.

“Many religious minority community members who remained [after the Taliban takeover in 1996] practiced their faith in hiding due to fear of targeting or reprisal as conversion from Islam to another religion was considered apostasy and could be punishable by death according to the Taliban’s interpretation of shari’a,” the USCIRF said in its 2021 annual report, released in April.

Life in Afghanistan for religious minorities were perilous long before Kabul fell to the Taliban on August 15.

“Small populations of the Christian, Baha’i, and Ahmadiyya religious communities exist in secret due to fear of reprisal,” said the report. “In 2020, fear among religious minorities markedly increased due to a variety of factors, including the downsizing of the U.S. troop presence, continued violence, and the government’s lack of control over the entirety of the country’s territory.”

“Cases of Muslims converting to Christianity remain few, but Christian faith-based organizations maintain they are closeted due to fear of reprisal by Islamist extremists, familial-societal ostracization, ethnic antagonism, and official repercussions for those charged with apostasy.”

Even though Sikhs and Hindus have had a reserved parliamentary seat since 2016, their communities have also been targeted.

“Driven by societal discrimination influenced by extremists, Sikhs and Hindus are subject to harassment, including physical assaults, abduction, land grabbing, looting, and pressure to convert,” the report said.

Terrorists have targeted Sikh shrines in recent years, killing more than a dozen people in Jalalabad in 2018, and killing at least 25 worshippers in March last year in Kabul. After the Kabul attack the government said it had arrested suspects belonging to a network of members of both ISIS and the Haqqani network, a Taliban faction.

According to State Department Refugee Processing Center data, 494 Afghan refugees have been resettled in the United States in fiscal year 2021, up until the end of July. (It no longer provides daily-updated numbers).

With the ongoing evacuation efforts in Kabul, the SIV numbers are expected to rise significantly in the coming months.