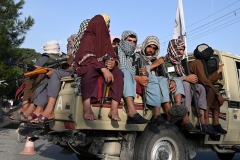 Taliban fighters patrol the streets of Kabul on August 23, 2021. (Photo by WAKIL KOHSAR/AFP via Getty Images)

(CNSNews.com) – Al Qaeda’s capability to attack the United States “is not present in Afghanistan” today, but it may “reconstitute.” And ISIS-K is a “serious threat” to U.S. troops right now, National Security Advisor Jake Sullivan told a news conference on Monday.

On Friday, President Biden said the United States had achieved its goal of “getting rid of al Qaeda in Afghanistan.” A reporter asked Sullivan on Monday if Biden is getting the “full picture” or if he’s just “misapplying the intelligence” when he makes such false claims.

What is present in Afghanistan right now, to our forces at the airport, is a serious threat from ISIS-K, which we’re trying to deal with.  And, of course, there’s the possibility that al Qaeda could reconstitute an external plotting capability in Afghanistan.

That’s why you’ve heard from the President repeatedly about the need for an over-the-horizon capability that will allow the United States, working with partners, to continue to suppress the terrorism threat in Afghanistan from al Qaeda or ISIS-K or anyone else, just as we work to suppress the terrorism threat from al Qaeda and ISIS in Yemen, in Syria, in Somalia, in the Islamic Maghreb, in many other countries.

And let me just finish by saying the President has been clear that, from his perspective, American counterterrorism capabilities have evolved to the point where we can suppress that terrorism threat without keeping thousands or tens of thousands of troops on the ground in a country.  We have proven that out in other countries, and that is exactly what we intend to do in Afghanistan, and the President has spoken about the terrorism issue in Afghanistan repeatedly, on multiple occasions.

Sullivan told reporters, “We believe we have the wherewithal to get out the American citizens who want to leave Kabul” by August 31, the deadline set by Biden.

“This operation is complex.  It is dangerous. It is fraught with challenges — operational, logistical, human.  And it’s produced searing images of pain and desperation. But no operation like this, no evacuation from a capital that has fallen in a civil war could unfold without those images,” he said.

Then Sullivan reframed the issue, downplaying the chaotic and desperate scenes at the Kabul airport.

As we conduct these operations, we are sustaining the highest level of vigilance for an attack against the airport by ISIS-K or another terrorist group.  Our commanders on the ground have taken every step they can to prepare for such an attack.  Our President has authorized every capability that those commanders have asked for to protect the airfield against such an attack.

We remain in close touch with allies and partners to coordinate the evacuation of their own citizens and their priority personnel, as well as to respond to the ongoing political and security situation in Afghanistan.

Sullivan said the United States — despite a complete withdrawal from Afghanistan in just a few days — “will remain persistently vigilant against the terrorism threat in Afghanistan and in multiple other theaters.  We have proven in other places that we can suppress terrorism without a permanent military presence on the ground, and we will do the same in Afghanistan.”

President Biden will discuss the situation in Afghanistan today, Tuesday, with G7 leaders. Sullivan said the point of the meeting is to “ensure the world’s leading democracies are aligned and united on the way forward.”