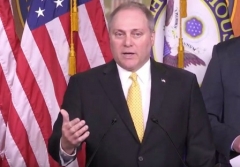 Flanked by Republican Members of Congress who served in Afghanistan, Scalise told reporters that the House should take up Republican bills to bring Americans home safely, not Pelosi’s plans to raise taxes:

“It’s really disgraceful that Speaker Pelosi, this week, brought us back to raise taxes on Americans here at home, rather than to help come up with a strategy to rescue Americans that President Biden abandoned in Afghanistan. That’s what we should be doing here. In fact, some of my colleagues have legislation to help aid and expedite the ability to get Americans back.”

While Democrats pursue their tax-and-spend agenda, House Republicans will be focused on rescuing “every American left behind enemy lines” by President Joe Biden, Scalise said:

“But what we know right now is we want our focus, and we want President Biden’s focus, on rescuing every American who he left behind enemy lines and to give us an accounting of who they are.

“We are going to continue to press for legislation on the House floor to confront that this week while Speaker Pelosi is more focused on trying to raise taxes and spend trillions of dollars, rather than work with us to answer these questions.”

Pelosi hasn’t just disgraced herself and the House, she has disgraced America in the eyes of U.S. allies around the world, Scalise said, noting how England’s Parliament has condemned Biden’s handling of the Afghanistan withdrawal:

“And we’ve been talking to a lot of our allies around the world. They are disgraced by what they’re seeing in the leadership, here, of President Biden. We’ve seen it on the floor of the Parliament in England, expressing disgust with this President and how he abandoned our allies. There’s a lot of damage to pick up as we look at what’s in front of us.”