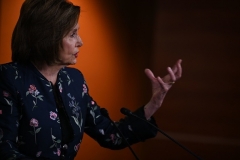 Speaker of the House Nancy Pelosi (D-Calif.) is trying to ram through the Democrats’ enormously expensive agenda by having the House pass a $3.5T “human” infrastructure bill before taking up a separate, bipartisan infrastructure bill. (Photo by BRENDAN SMIALOWSKI/AFP via Getty Images)

(CNSNews.com) – Rep. Josh Gottheimer (D-N.J.) is among the ten House Democrats who are calling for an immediate vote on the bipartisan infrastructure bill that passed the Senate with 19 Republican votes.

House Speaker Nancy Pelosi (D-Calif.) has said she won’t bring the bipartisan bill to a vote until the House passes a much larger, $3.5 trillion-plus “human” infrastructure bill.

Gottheimer on Monday told CNN he wants both bills to pass, starting with the bipartisan bill:

We want them both to move forward and pass. And, you know, but first and foremost, we’ve got to pass that historic, once in a century infrastructure bill that came out of the Senate a couple of weeks ago with all 50 Senate Democrats and 19 Republicans.

And, you know, Jim, what I heard from the calls I’m getting are actually from the hard-working men and women of labor and from people in my district who are saying, I don’t get this, we voted on this in the Senate. It came out. So all of this to happen to get shovels in the ground and 2 million people a year to work is to pass this in the House. So that’s all we’re asking for.

And then full steam ahead working on the reconciliation package. I’ll support the budget resolution as soon as we vote on infrastructure.

I just — we just can’t afford to wait months on that when you’ve got a third of our bridges unsafe, you know, the third worst roads in the country in Jersey. The idea that we would wait just doesn’t make any sense. So I think this is pretty common sense, and we’ll work it out.

Gottheimer noted that President Biden has said he wants the infrastructure bill sent to him as soon as possible: “So that’s what we’re trying to do here. And, you know, you’re talking about a lot of lives for a lot of hard-working men and women plus a crumbling infrastructure in too many parts of our country. So let’s just get that done, not wait months, not risk it and then move right to reconciliation.”

On Monday, according to The Hill, House Speaker Nancy Pelosi “pleaded” with Gottheimer and the nine other Democrat holdouts to “unite behind a new strategy” to advance Biden’s enormously expensive entitlement agenda, much of which has nothing to do with traditional infrastructure.

Under that strategy, Politico reported, the budget vote would be folded into the roll call vote on the procedural rule — “basically, it would deem the budget as passed without having to hold a separate vote. In return for their support, moderates were offered the guarantee of a vote on the bipartisan infrastructure bill by a deadline of Oct. 1.”

“It is unfortunate in my view that we have to have a discussion about process, when we want to have a discussion of policy,” Pelosi said, according to a source to spoke to The Hill. “Right now we have an opportunity to pass something so substantial for our country, so transformative we haven’t seen anything like it … We cannot squander this majority and this Democratic White House by not passing what we need to do.”

Democrats will meet again Tuesday morning for more discussions about the way forward.

All congressional Republicans oppose the $3.5 trillion “human” infrastructure bill, which includes the green new deal and most of the Democrats’ free-stuff agenda.