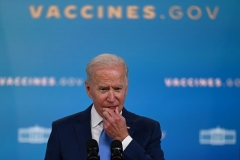 US President Joe Biden once again urges Americans to get vaccinated on Monday, as his administration scrambles to get Americans and our allies out of Afghanistan. (Photo by JIM WATSON/AFP via Getty Images)

G7 leaders reportedly will press President Biden today to extend the August 31 deadline he set for ending the U.S. presence in Afghanistan.

Biden has said he “hopes” he doesn’t have to extend the deadline, but it appears the massive and chaotic evacuation effort now underway will not be complete by then. A Taliban spokesman said a few days ago there will be “consequences” if the Americans do not withdraw on Biden’s August 31 timetable.

“Look, the Taliban should not be allowed to tell us how long we are there to get our personnel out,” McConnell told Fox News on Tuesday morning.

“That’s our decision, not theirs. They can cooperate if they want to. If they don’t, we need to do what’s necessary to get our people out and to get out the loyal translators who are stuck there as well who worked with us.”

McConnell on Tuesday called the situation in Afghanistan “one of the greatest foreign policy disasters in American history.”

I think it’s important to remember where we were a few months ago before the president’s reckless decision to leave. We only had 2,500 troops there. We hadn’t lost a single American person, military personnel, in a year. The Taliban, the barbarians, were not in charge of the country. We were keeping the lid on. And al Qaeda was not there.

So the decision to pull out was a gargantuan mistake in my opinion. Having made that decision, you’d have to conclude these guys couldn’t organize a two-car funeral. I mean, here’s where we are. The president needs to forget about the August 31st deadline. We need to send in enough American personnel, military personnel, to rescue our people.

And by the way, there are more American soldiers there now than before the president made the decision to leave. Extend the deadline, get outside the perimeter, make sure that every single American who wants to leave is able to get out with our assistance and our Afghan allies.

McConnell said America’s NATO allies realize that Biden’s decision has “greatly weakened our efforts in the war on terror,” which “could be fought in two places — over there or over here.”

“And the strategy since 9/11 has actually worked. We’ve not had another foreign-inspired terrorist attack in the United States in 20 years. We had finally evolved into a policy that was actually working in Afghanistan as well. With a very light footprint we were keeping the lid on; the barbarians were not in charge of the government.

“Of course it was not a Jefferson democracy. It’s not why we went there in the first place. It’s not about nation-building but about protecting us at home from foreign terrorist attacks.

McConnell said it’s no surprise that Americans are likely to say yes, we’ve been in Afghanistan too long. They’d probably say the same thing about our troop presence in Germany, Japan and South Korea as well, he said.

“You have to provide the context,” McConnell said. “In the war on terror, the idea was to try to combat the terrorists overseas so they could not successfully attack us here at home. That’s the mission. It worked. And the president’s reckless decision to precipitously withdraw was a clear mistake, and then having no plan to execute the withdrawal was an even bigger mistake.

“This is a foreign policy blunder of gargantuan proportions; it’s a stain on our national reputation and will be remembered for decades.”

The Washington Post reported on Tuesday that CIA Director Bill Burns secretly met with the Taliban leader in Kabul on Monday, possibly to discuss a deadline extension.