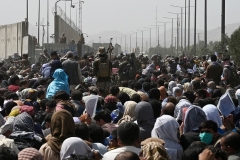 Afghans gather on a road near the airport in Kabul on August 20, 2021. (Photo by WAKIL KOHSAR/AFP via Getty Images)

(CNSNews.com) – Assuming that U.S. troops and military planes will be the last ones to exit Afghanistan — how does that happen, given the crowds jamming the Kabul airport and those waiting outside the gates who are desperate to be on any flight out — including the final flight?

A reporter asked Pentagon spokesman John Kirby on Tuesday how the final exit will happen without the “active cooperation of the Taliban to keep the crowds away as U.S. troops first thin out their perimeter and then pull back?”

Kirby said it has to be done “very carefully and methodically.”

The larger issue that any retrograde out of or drawdown out of an environment that you can’t assume is always going to be permissive is one that has to be done very carefully and sequenced in a methodical way so the safety and security of our people and the people we’re trying to protect is considered of paramount importance.

And so we aren’t — I’ll level set with you now, we won’t be able to tell you once we start to affect this withdrawal, and like I said, we’re still planning on the end of the month. We won’t be able to provide a tik-tok every day what we’re moving out and at what pace so we can limit vulnerabilities in the information space and the actual physical space of the airport as we move out.

It is all done in a very careful, methodical way to preserve as much capability to the very end as you need as well as security. Not just the security for our folks but the security for the people we are trying to safely evacuate. I’ll turn it over to the general in case he has more detail.

“I just would add to that is, security is paramount during any phase of an operation. So as you look at as we go forward here, the commanders are going to continually communicate, coordinate, to insure that security is set to allow all those flight operations, all those things to continue to the end.”

The reporter, David Martin, asked, “Does the methodical, orderly withdrawal that he just referred to, does that require the assistance of the Taliban?”

“It requires the coordination that I think we’re doing right now to maintain that security,” Taylor said.

Kirby agreed: “Yeah, there’s no question that, David, as we work through this, the daily communication with Taliban commanders is going to have to continue. That’s just a hard fact.”

Martin asked if the Taliban’s promise of cooperation expires on August 31st:

“I’m not going to speculate about — or even speak for them or for their intentions,” Kirby said. “We are, again — the mission has been to end on the 31st, that is the assumption we’re working towards and we’ll just have to keep moving forward.”