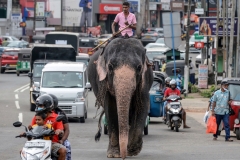 While Democrats and Republicans in the U.S. debate whether a photo I.D. should be required to vote, a new law in Sri Lanka requires captive elephants to have biometric photo I.D. cards.

“Sri Lanka will issue captive elephants with their own biometric identity cards and ban their riders from drinking on the job under a wide-ranging new animal protection law.”

“The new law will require all owners to ensure that animals under their care have new photo identity cards with a DNA stamp.”

The license form for elephant-registration requires four photos of the elephant: right side, left side, front and back.

The law also provides elephants with a wide range of new workers’ rights, including:

“The person who owns or has the custody of such elephants shall ensure that the mahout (rider) is not consuming any liquor or any harmful drug while employed,” AFP quotes Wildlife Protection Minister Wimalaweera Dissanayaka saying.

Violations of the drinking-and-riding and worker-rights laws is punishable of up to three years in prison, revocation of the owner’s license and seizure of his animal.

Even before the new law was passed, capturing wild elephants in Sri Lanka had been a crime punishable by death.