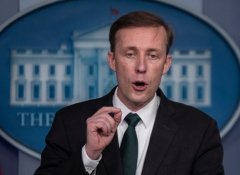 (CNSNews.com) – National Security Adviser Jake Sullivan on Monday tried to clear up any contradiction between what President Joe Biden and Secretary of State Antony Blinken said about al Qaeda’s presence in Afghanistan.

“So Friday the president said that we got rid of al Qaeda in Afghanistan. Sunday, the secretary of state said there is al Qaeda in Afghanistan. So are you presenting the president with the full picture or is he just misapplying the intelligence when he makes these public statements?” Fox News White House Correspondent Peter Doocy asked at the White House press briefing.

“What is present in Afghanistan right now to our forces at the airport is a serious threat from ISIS-K which we’re trying to deal with, and of course, there’s the possibility that al Qaeda could reconstitute an external plotting capability in Afghanistan,” he said.

“That’s why you’ve heard from the president repeatedly about the need for an over-the-horizon capability that will allow the United States working with partners to continue to suppress the terrorism threat in Afghanistan from al Qaeda or ISIS-K or anyone else, just as we worked to suppress the terrorism threat from al Qaeda and ISIS in Yemen, in Syria, in Somalia, in the Islamic Maghreb, in many other countries,” Sullivan said.

“And let me just finish by saying the president has been clear that from his perspective, American counter-terrorism capabilities have evolved to the point where we can suppress that terrorism threat without keeping thousands or tens of thousands of troops on the ground in a country,” he said.

“We have proven that out in other countries, and that is exactly what we intend to do in Afghanistan, and the president has spoken about the terrorism issue in Afghanistan repeatedly on multiple occasions,” Sullivan added.

The national security adviser said that more than 37,000 people have been evacuated from Afghanistan since Aug. 14: U.S. citizens, third country nationals, Afghan allies and Afghans at risk of persecution or worse.

Sullivan explained why the administration cannot give an exact figure on the number of Americans still in Afghanistan.

“When Americans have come to Afghanistan over the years, we asked them to register with the embassy. Many of them left without deregistering. Others never register at all. That is their right of course, and it is our responsibility to find them, which we are now doing hour by hour,” he said.

ABC News Chief White House Correspondent Cecilia Vega asked, “A Taliban spokesman has said that it would be a red line for the U.S. to keep troops in Afghanistan past its own Aug. 31st deadline. Are you in talks with the Taliban over extending that deadline?”

“We are in talks with the Taliban on a daily basis through both political and security channels. I’m not going to get into the details of those discussions here to protect those discussions, which are covering a wide range of issues,” Sullivan said.

“We are also consulting closely with our allies and partners on the issue of the evacuation and its progress. In fact, the president just got off the phone with the British prime minister a short time ago. We are taking this day by day,” he said, adding that the administration is making “enormous progress.”

“And taking a step back, a week ago, I don’t think almost anyone in this briefing room would have thought we’d be standing here today with 37,000 people already evacuated from the country. We believe we’re making progress. We’re going to keep making progress, and the president will ultimately make his decision about the precise shape and scope of the operation,” the national security adviser said.

When asked whether Biden decided whether he will need more time beyond the Aug. 31 deadline to get all U.S. citizens and Afghan people out of the country, Sullivan said, “The president believes we are making substantial progress – dozens of flights, thousands now tens of thousands of people evacuated from the country. We believe today will be an efficient and effective day, and tomorrow and the next day as well.”

As to why Biden did not prepare the American people for the chaos that would ensue in withdrawing U.S. troops from Afghanistan, Sullivan said, “Whether Kabul fell in August or September or December or next August, the fact is whenever it fell, there were going to be American citizens in Kabul who needed to be evacuated.

“So an evacuation operation in a dangerous situation was going to have to happen at some point, and when you run an operation like that, when you are trying to position assets to go in and secure an airfield in a city that has been taken by opposing forces with a government that’s collapsed, your contingency plan is going to hit head on with reality, and there are going to be complexities and challenges and difficulties and you work through them,” he said.

“You make adjustments, and you ultimately get an operation going that is moving out thousands if not tens of thousands of people daily. That is what we have accomplished through the course of the week. It has not been without immense difficulties. We are clear-eyed about those difficulties,” Sullivan said.