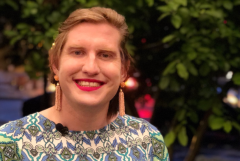 Charlotte Clymer, a transgender “female,” who is a 2021 Fall Fellow at Georgetown University. (Twitter)

(CNS News) — Although Georgetown University is the nation’s oldest Catholic institution of higher learning, founded by Bishop John Carroll in 1789, it has named transgender “female” Charlotte Clymer, a biological male and transgender activist, to be one of its fall 2021 “Fellows.”

The Georgetown Fellows “lead weekly discussion groups,” “hold office hours for students” and “mentor students,” according to the Fellows’ webpage. They also receive a stipend, may use campus resources, and may audit any class at the McCourt School of Public Policy, “one of the top public policy schools in the nation.”

Most importantly, however, Clymer and the other Fellows “get to work with smart students in a collaborative way, to improve the way we all do politics,” states the webpage.

Clymer graduated from Georgetown University in 2016. He came out publicly as a transgender female in 2017.

In the past, Clymer has worked as Director of Communications & Strategy at Catholics for Choice, a pro-abortion organization. Clymer has also worked as a Press Secretary for Rapid Response at the Human Rights Campaign, a pro-LGBTQ lobby organization.

Before coming out publicly as transgender, Clymer served in the U.S. Army (2005-2012) and attained the rank of corporal.

In 2019, Clymer was listed in the 40 Under 40 Queer Women of D.C. by the Mayor’s Office and The Washington Blade. Clymer was also listed in Fortune Magazine’s 2020 40 Under 40 in the Politics & Government category.

Among the eight topics Clymer will speak about as a Georgetown Fellow is “White Supremacy: The Central Hub of American Bigotry.” The description of this talk for Week 7  reads, “Because racial inequality permeates every facet of American life, all other areas of political and social advocacy intersect with efforts to combat white supremacy. But how the progressive movement should go about this has been the focus of considerable debate and anger across the political spectrum. This week, we’ll discuss the broader
national dialogue on white supremacy and nationalism and the debate over #DefundThePolice as a messaging strategy.”

Another topic, for Week 8, is “Climate Change and Advocacy.” The description for this talk partly reads, “From heatwaves to flooding, the world is experiencing record-breaking natural disasters that climatologists believe is the direct result of global warming. Something’s gotta change, but efforts to educate the public have met considerable resistance. How can advocates convince the public to take climate change seriously?”

According to the Catechism of the Catholic Church, “From its conception, the child has the right to life. Direct abortion, that is, abortion willed as an end or as a means, is a “criminal” practice (GS 27 § 3), gravely contrary to the moral law. The Church imposes the canonical penalty of excommunication for this crime against human life. (2322)

The Catechism further teaches, “Basing itself on Sacred Scripture, which presents homosexual acts as acts of grave depravity, tradition has always declared that ‘homosexual acts are intrinsically disordered.’ They are contrary to the natural law. They close the sexual act to the gift of life. They do not proceed from a genuine affective and sexual complementarity. Under no circumstances can they be approved.” (2357)

Commenting on the transgender movement, Bishop David Konderla, chairman of the U.S. Bishops’ Subcommittee for the Promotion and Defense of Marriage, said in March 2021, “We certainly oppose unjust discrimination but all persons are created male and female. Our sex is a gift to us from God and our gender goes with our sex.”

“Our sexuality is created for the purposes of marriage,” he said.  “Marriage is the union of one man and one woman for life and for the purpose of also creating a family. All of these things are right and true and people of faith believe them very deeply….”

During a 2016 visit to Poland, Pope Francis described the promotion of gender transition as “ideological colonization.”

“In Europe, America, Latin America, Africa, and in some countries of Asia, there are genuine forms of ideological colonization taking place,” said the Pope.  “And one of these – I will call it clearly by its name – is [the ideology of] ‘gender.’ Today children – children! – are taught in school that everyone can choose his or her sex. Why are they teaching this? Because the books are provided by the persons and institutions that give you money. These forms of ideological colonization are also supported by influential countries. And this is terrible!”

Pope Francis continued, “In a conversation with Pope Benedict, who is in good health and very perceptive, he said to me: ‘Holiness, this is the age of sin against God the Creator.’ He is very perceptive. God created man and woman; God created the world in a certain way… and we are doing the exact opposite.”

Charlotte Clymer, a transgender “female,” who is a 2021 Fall Fellow at Georgetown University. (Screenshot, Instagram)

“God gave us things in a ‘raw’ state, so that we could shape a culture; and then with this culture, we are shaping things that bring us back to the ‘raw’ state!” said Francis.  “Pope Benedict’s observation should make us think. ‘This is the age of sin against God the Creator.'”

As part of its mission statement, Georgetown University states that it “provides excellent undergraduate, graduate and professional education in the Jesuit tradition for the glory of God and the well-being of humankind.”