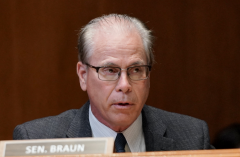 (CNS News) – When asked if the $28.4 trillion federal debt was too much, Senator Mike Braun (R-Ind.) said it was “too much a long time ago” and it will “drive it into the ditch sooner rather than later.”

At the U.S. Capitol on Tuesday, CNS News asked the senator, “The debt of the federal government is now $28.4 trillion. Is that too much?”

Sen Braun replied, “I said that was too much a long time ago. When I got here two-and-a-half years ago, you know where we were? $18 trillion. You know where we are going to be over the next few months? About $32 [trillion]. You cannot borrow money and think that it’s going to deliver prosperity like that.”

CNS News asked the follow-up question, “Is there any federal program or agency that you would eliminate to reduce the federal spending?”

The senator responded, “Just start with the penny plan. In any business, if you were spending that much more money than what you’re taking in, you’d look at the places not delivering the goods, and then you’d go across the board and just put a lid on it. Don’t double, triple, and quadruple down like this place — it’ll drive it into the ditch sooner rather than later.”

In the federal government, in addition to the legislative, judicial, and executive branches, there are 15 departments, such as Defense, HHS, Commerce, and Education. Also, there are approximately 457 agencies.