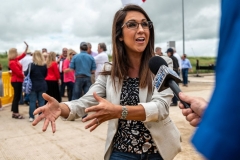 Rep. Lauren Boebert (R-CO) speaks to a reporter during a visit to the border wall near Pharr, Texas on June 30, 2021. (Photo by SERGIO FLORES/AFP via Getty Images)

(CNSNews.com) – Rep. Lauren Boebert (R-Colo.) said Friday that she has introduced a resolution to censure President Joe Biden for his handling of the border crisis, and she supports her colleague Rep. Andy Biggs’ (R-Ariz.) efforts to impeach DHS Secretary Alejandro Mayorkas.

“In my censure resolution that I introduced to censure President Biden for his dereliction of duty to secure the southern border, I called for the removal of Secretary Mayorkas, and I certainly support Chairman of the Freedom Caucus Andy Biggs’ efforts to impeach Secretary Mayorkas,” the congresswoman said told Fox News’s “Mornings with Maria Bartiromo.”

“While President Biden is threatening more lockdowns of law-abiding citizens he still refuses to lock down the southern border. We’re seeing records every month from border crossers, illegal drugs crossing and killing our citizens. Enough fentanyl has been released into our country as you know Maria to kill Americans multiple times over. It’s out of control,” Boebert said.

“It requires more documentation to go to a restaurant in New York City than it does to cross our southern border. That is ridiculous. Under Biden, requiring id to vote is considered Jim Crow 2.0, but illegal crossing our southern border with no id gets illegal aliens free flight to any city of their choice and this is unacceptable,” she added.

On the infrastructure bill, host Maria Bartiromo wondered why Republicans didn’t demand that Democrats and the administration acknowledge the border crisis and demand that something be done about COVID-positive people coming into the country before agreeing to spend a trillion dollars on infrastructure.

“Maria, I have many of the same questions and many of the same frustrations. It is unfortunate to see the same Republicans do this once again. There are so many times that we looked back and Republicans think that if they give just a little bit, the Democrats will somehow play nice and it never works out,” Boebert said.

“If we keep spending like AOC and Nancy Pelosi and frankly many RINOs are trying to do, it won’t be long before treasury secretary Janet Yellen has to call JG Wentworth at 877-CASH-NOW just to keep the government open,” she said.

The congresswoman noted that the infrastructure bill that cleared the Senate includes billions for electric school buses and salmon recovery.

“This $1.2 trillion infrastructure bill has $7.5 billion for electric school busses, funds research for safe wildlife crossings funds for salmon recovery and I could go on and on. Democrats want to spend $3.5 trillion on literally everything you can imagine, minussing reopening our economy, securing the southern border, and building the much needed Keystone XL pipeline,” Boebert said.

“The American people are suffering from these COVID restrictions and regulations. Our children suffering with the threat of being masked at school, some schools are choosing not to. I’m very grateful for the school boards who stood up for that. COVID is released into our country through the southern border on a daily basis. We have more than 7,000 cases just in McAllen, Texas, you alone,” the congresswoman added.

Boebert introduced the American Infrastructure Modernization Act (AIM) in May, which would use unspent money from the CARES Act for infrastructure.

“Maria, I have a real infrastructure bill that I’ve already introduced months ago. It’s called the AIM act. The American infrastructure modernization act, it takes $650 billion of the already approved unspent cares money, you know the sixth care package, the sixth COVID relief package that the House passed and the Senate passed and Biden signed,” the congresswoman said.

“It would take that money that is not yet spent and put it towards real infrastructure, and the amount that I have, the price tag that I have on that does not raise the American taxpayers dollar any more than Democrats already have this year and there’s actually more funding for real infrastructure that we need here in America,” she added.