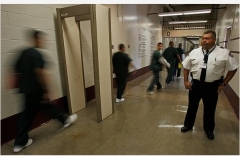 (CNSNews.com) – Department of Justice Inspector General Michael Horowitz sent a memorandum to Federal Bureau of Prisons Director Michael Carvajel on Wednesday to notify him that federal prison staff were able to enter a facility during night shifts without going through a mandatory metal-detector check.

“The OIG has found that the security risks identified above increase the risk that staff will bring contraband into BOP facilities, thereby jeopardizing the safety and security of the institution, inmates, and other staff,” said Horowitz in his memorandum.

“As you are aware, multiple OIG investigations have identified staff involvement in the introduction of contraband at BOP facilities, and the OIG has repeatedly identified the importance of an effective staff search policy as central to preventing such conduct,” he said.

“In connection with an investigation regarding the introduction of contraband at a BOP facility, we reviewed the facility’s video monitoring system and found that staff, carrying personal items, were allowed to enter the facility during the night shift by walking around the metal detector and without being searched,” said Horowitz.

“We were told that it is only during the low manning times of the night shift that staff are permitted to circumvent the search policy upon entering the institution,” he said.

“However, because the facility is not a minimum-security facility, all staff and their belongings are required to be searched by electronic means before entry,” Horowitz continued. “There is no exception in the BOP’s policy for staff that enter
during the night shift or during other times when staffing is low.”

The IG instructed the BOP director: “The BOP should immediately notify all BOP facilities that BOP staff members are not permitted to enter the institution without being screened by other BOP personnel.”

“Please advise the OIG within 2 days of the date of this memorandum on what actions the BOP has taken or intends to take with regard to these issues,” Horowitz told the director.