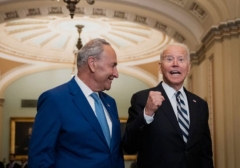 Sometimes, when you go into a store with expensive merchandise on the shelves, you will see a sign that reads, “You break it, you buy it.”

That’s a good slogan for the Republicans as they continue to battle the left’s economically catastrophic quest to bankrupt our country by authorizing some $6 trillion of new spending. This is the economic theory that if the ship is sailing toward an iceberg, best to speed up.

Under the Biden-Pelosi-Schumer plan, the national debt, which now stands at near $30 trillion and well above the warning sign of 100% of our GDP, would soar to close to $50 trillion in 10 years. A new study by FreedomWorks shows that the debt under the Democratic plan could rise to 200% of GDP over the next decade — almost twice as high as any previous time in our nation’s history.

This debt explosion will happen even though Democrats are also planning one of the largest tax increases in American history.

President Joe Biden and House Speaker Nancy Pelosi plan to do all of this without one single Republican vote — except for a handful of GOP senators and House members who plan to vote for the sham $1 trillion “infrastructure” bill, which mostly funds mass transit and green energy nonsense.

Now here is where the story gets interesting. The Democrats have to authorize an increase in the debt ceiling to accommodate this multitrillion-dollar spend-a-thon. Republicans are rightly saying, “Don’t look at us.” So now the Biden crowd and their pals in the media are saying that if Republicans don’t approve a debt ceiling bill, THEY are the ones who are putting America in a financial crisis. Virginia Democratic Sen. Mark Warner, who is all in on the Biden spending stampede, sanctimoniously declared that Republicans should not “mess with the full faith and credit of the United States of America” by not co-signing the debt ceiling extension.

That’s rich. Doesn’t it seem self-evident that the people who are putting our credit at risk and shoving us on to the precipice of a financial collapse are the ones who actually approved all of this debt spending? They run up the credit card and blame the credit card company for not giving them a higher credit limit. Amazing.

There is another reason for Republicans to play hardball on the debt ceiling bill. The only time in the last 35 years that the pols in Washington — and this goes for both parties — have done anything to control spending has been as a condition of raising the debt ceiling. This is how we got the Gramm-Rudman-Hollings reforms in 1985, how Republicans in 1995 were able to end the Bill Clinton spending spree, and how we got the Budget Control Act in 2011 with spending caps and sequestration if spending rose above the caps. All of these measures helped to slow the spending stampede.

Democrats want a “clean” debt ceiling bill with NO new guard rails. Why? Perhaps they have in mind a few more trillion dollars they want to spend in the years to come.

This is a scary time for our country. Democrats are drunk with power. They have adopted a new dingbat economic theory they call Modern Monetary Theory, which predicts that the government can borrow from now until kingdom come at ever-larger amounts and nothing bad will happen because we are the world reserve currency and foreigners are willing to lend us money at low interest rates.

Except history is replete with stories of great empires collapsing because of runaway debt and spending. The Modern Monetary Theory principles have been test-driven in more recent times by the Argentines, Venezuelans, Puerto Ricans, Bolivians, Zimbabweans and Greeks. There was no pot of gold at the end of that rainbow — just poverty, despair and bankruptcy.

The Biden Democrats control all of the levers of power, and they are using it to “transform” the country in a way that not many voters thought they were buying into. Republicans would be fools to give one single vote for the Democrats’ spending and debt binge. The Democrats broke it. They own it.

Stephen Moore is a senior fellow at the Heritage Foundation and an economic consultant with FreedomWorks. He is the co-author of “Trumponomics: Inside the America First Plan to Revive the American Economy.” To find out more about Stephen Moore and read features by other Creators Syndicate writers and cartoonists, visit the Creators Syndicate website at www.creators.com.