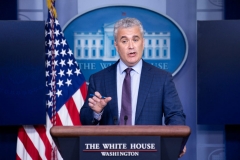 Jeff Zients, the White House’s Covid-19 response czar, speaks during a press briefing at the White House where they spoke about a pause in issuing the Johnson & Johnson Janssen Covid-19 vaccine on April 13, 2021, in Washington, DC. (Photo by BRENDAN SMIALOWSKI/AFP via Getty Images)

(CNSNews.com) – Jeff Zients, President Biden’s COVID-19 task force coordinator, said Thursday that there were more COVID cases in Florida than in “all 30 states with the lowest case rates combined, and Florida and Texas alone have accounted for nearly 40 percent of new hospitalizations across the country.”

“In the past week, Florida has had more COVID cases than all 30 states with the lowest case rates combined, and Florida and Texas alone have accounted for nearly 40 percent of new hospitalizations across the country,” he said.

Zients also announced that the VA and HHS are requiring all health care personnel to be fully vaccinated.

“State and local governments; healthcare systems; businesses, small and large; universities; and other institutions are also stepping up. Since last week, Washington State; Washington, D.C.; and Seattle have all adopted vaccination requirements, and more than 50 health systems across the country have announced that all staff need to be vaccinated, bringing the total to more than 200 health systems,” he said.

Zients pointed out that more private businesses are also instituting vaccine mandates for their employees.

“Just in the past 24 hours, Amtrak, McDonald’s, NBCUniversal, Discovery, and Capital One all announced new rules that workers must be vaccinated to return to the office. California announced all schoolteachers and staff in the state, serving more than 6 million students, will be required to be vaccinated or tested weekly,” he said.

“And the NEA and the AFT, two of the largest unions in the country — representing 5 million educators, childcare workers, and school staff — both came out in favor of school districts pursuing COVID-19 vaccination policies, including requirements for teachers and staff,” Zients said.

“And across the country, nearly 700 colleges and universities have announced vaccination requirements, which will cover roughly 5 million students getting ready to head back to school. So, clearly, vaccination requirements are gaining momentum across the country and are already covering tens of millions of workers, educators, college and university students, and healthcare providers,” he said.

Zients said that the U.S. is averaging about a half million people getting newly vaccinated each and every day, and overall in the last week, 3.3 million Americans rolled up their sleeve to get their first shot. In the past month, we have doubled the average number of 12- to 17-year-olds getting newly vaccinated each day — critical progress as millions of adolescents start heading back to school.