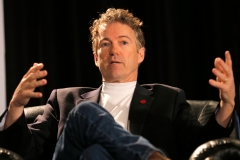 This time, YouTube—owned by Google—took down a video by Sen. Rand Paul (R-KY), in which he discusses face masks and COVID-19. YouTube also banned Paul from its platform for a week.

“We removed content from Senator Paul’s channel for including claims that masks are ineffective in preventing the contraction or transmission of COVID-19, in accordance with our COVID-19 medical misinformation policies,” YouTube said in a public statement.

Notably, YouTube’s policy cites the World Health Organization and “local authorities” as its source of what’s correct about COVID-19.

Yet the WHO not only flubbed its early response to the disease; it was criticized and defunded by then-President Donald Trump for its connections with China and general dysfunction.

But this is only one bad part about YouTube’s decision.

Paul, a physician, wasn’t saying in the video that masks are ineffective against the coronavirus. He was saying that some masks are effective, while others are not.

The Kentucky senator advised that N95 masks can prevent you from contracting COVID-19, but simple cloth masks don’t provide this protection. This opinion runs counter to guidance from the Centers for Disease Control and Prevention.

Of course, the CDC initially said that masks don’t work at all, but here we are.

In the video removed by YouTube, Paul makes his case that some masks may protect you from COVID-19, but others likely don’t work at all and may put you in more danger if they give you a false sense of protection.

In the video, Paul says:

Most of the masks you get over the counter don’t work; they don’t prevent infection. Saying cloth masks work when they don’t actually risk lives, as someone may choose to care for a loved one with COVID while only wearing a cloth mask. This is not only bad advice but also potentially deadly information.

The CDC, Paul adds, essentially has been ignoring studies that say this:

A Danish study of 6,000 participants found that wearing a surgical mask did not significantly reduce a person’s risk of COVID-19 infection compared to the risks facing those who did not wear masks. A Vietnamese study of 1,600 participants found that cloth masks allow for 97% penetration of particles the same size as the virus. This study also found that cloth mask wearers had a higher rate of infection than the control group who wore no masks.

After YouTube removed his video, Paul responded in another video.

“Apparently, because I dared to contradict Dr. [Anthony] Fauci and the government, YouTube has removed my video,” Paul says in the new video. “YouTube may be a private entity, but they’re acting like an arm of the government censoring those who provide an alternative view to the science deniers in Washington—people like Dr. Fauci, who have lied to the American people time and time again about masks.”

YouTube also took down Paul’s response video, but it is posted on the competing video website Rumble.

“Censorship by YouTube is very dangerous as it stifles debate and promotes groupthink where the ‘truth’ is defined by people with a political agenda,” Paul says in the new video. “If you want unfiltered news, go to Rumble.com.”

YouTube has censored videos from The Heritage Foundation featuring Dr. Michelle Cretella, an experienced pediatrician, who warned about giving puberty blockers to young children. The platform also censored a video of a Heritage event discussing the sexualization of children in culture and education.

Such censorship represents only the tip of the iceberg.

The whole situation demonstrates why so many Americans now distrust Big Tech companies, whose policies often are opaque and unevenly enforced. Worse, these companies seem to be working in lockstep not only with other huge tech companies but with governments.

What happens when regulation—which many Big Tech companies seem quite eager for—becomes cooperation with the administrative state?

In this particular case, YouTube decided to censor an elected leader who disagrees with the policy of an unelected government agency.

It’s particularly disturbing given that White House press secretary Jen Psaki said in July that the Biden administration would be “flagging problematic posts for Facebook that spread disinformation.”

So, the government isn’t censoring information, it’s just working with the most powerful tech companies in the world to screen what it considers “misinformation.”

Surely, Big Tech companies and government officials couldn’t be wrong or be making decisions based on politics rather than health or science, could they?

At one point, Facebook used misinformation warnings on posts arguing that the coronavirus that causes COVID-19 may have been man-made and originated in a lab. Facebook eventually had to change its policy and stop after it became hard to deny that a substantial amount of evidence exists for the lab-leak theory.

Who was spreading “misinformation” after all?

Maybe tech company chiefs and government officials shouldn’t be the arbiters of what is truth and what isn’t. Maybe that ultimately should be left to the American people—and to courts, in the case of libel.

Regardless of whether Paul is right about N95 and cloth masks, a much larger issue is at stake.

After Trump effectively was banned from all major social media platforms, I wrote in January that “if even the president can be silenced by a Big Tech cabal, what’s the average American to do when that mighty, metaphorical digital knee comes down on their neck?”

That surely must be a cause for concern for all Americans who care about freedom of speech and, ultimately, the fate of self-government.

Jarrett Stepman is a contributor to The Daily Signal and co-host of The Right Side of History podcast. Send an email to Jarrett. He is also the author of the new book, “The War on History: The Conspiracy to Rewrite America’s Past.”

Editor’s Note: This piece originally appeared on The Daily Signal.