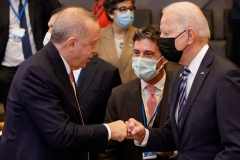 President Biden and Turkish President Recep Tayyip Erdogan at a NATO summit in Brussels in June. (Photo by Olivier Matthys/Pool/AFP via Getty Images)

(CNSNews.com) – Plans for President Biden’s “summit for democracy” are moving ahead, but the administration has yet to reveal which countries are likely to be invited, a politically-charged issue, given the fact some longstanding partners claim to be democracies despite widely-criticized authoritarian tendencies.

Whether countries such as Turkey, Pakistan, the Philippines, Nigeria, or any nation in the Middle East apart from Israel, merits an invitation will generate discussion and debate in the weeks and months ahead.

The White House on Wednesday announced that the summit – a Biden first-year campaign pledge – will be convened in virtual form on December 9-10, to be followed by an in-person second meeting around the summer or fall of 2022.

A “diverse group of the world’s democracies” would take part in the event, with a focus on the themes of “defending against authoritarianism, fighting corruption, and promoting respect for human rights,” it said. Both summits would bring together heads of state, civil society, and the private sector.

“The challenge of our time is to demonstrate that democracies can deliver by improving the lives of their own people and by addressing the greatest problems facing the wider world,” the White House said.

Asked how the administration intends to “draw a line between who is a democracy that is qualified to be invited and who isn’t,” State Department spokesman Ned Price reiterated the point about diversity.

“What I can say is that we have reached out to a regionally diverse set of both well-established as well as emerging democracies whose progress and commitments will advance a more just and peaceful world,” he said, adding that the goal was “to be as inclusive as possible.”

The most notable previous initiative to bring together democracies from across the world – rather than geographically-limited entities like the European Union – was the Community of Democracies, founded in Warsaw, Poland in 2000 and grouping together more than 100 governments that committed themselves to democratic norms.

Two decades later, the inclusion in that list of some countries would raise eyebrows. Algeria, Azerbaijan, Egypt, Jordan, Mali, Nicaragua, Qatar, Russia, and Venezuela were among those who put their names to the group’s founding Warsaw Declaration.

In the judgment of Freedom House, the Washington-based independent watchdog that grades countries each year on political rights and civil liberties, all are ranked as “not free.” Many of the other Warsaw signatories fall in its “partly free” category.

(Of those nine countries, only Jordan and Mali were still among the signatories to a declaration of “recommitment to the Warsaw Declaration,” produced ten years after the original gathering.)

Biden’s planned summit is labeled a “summit for democracy” rather than a “summit of democracies.”

Still, the invitation list will be closely watched, especially if countries graded “not free” or “partly free” are included.

Anders Aslund, a Swedish economist and a senior fellow at the Atlantic Council, welcomed news of the summit, but said he would prefer “clear minimum criteria for democracies to be declared in advance.”

Countries judged by Freedom House to be “not free” should not be invited, he said, but the “difficult issue” will involve some of the “partly free” countries, listing Hungary, India, Indonesia, Nigeria, Pakistan, and the Philippines as examples.

Including countries like Turkey (graded “not free” by Freedom House) and Pakistan (“partly free”) is likely to be especially controversial, given the records of the two governments at home and in their respective regions.

Pakistan has some of the world’s most notorious blasphemy laws at home, has a poor record on upholding fundamental human rights, as well as a long history of documented support for terrorists in disputed Kashmir and Afghanistan

Nonetheless, Pakistani Prime Minister Imran Khan clearly expects an invitation: In a tweet posted just days after the November 2020 election he congratulated Biden and said he looked forward to his global summit on democracy.

Turkish President Recep Tayyip Erdogan’s authoritarian rule, especially since a failed 2016 coup attempt prompted a massive crackdown on dissent, has caused serious rifts with Ankara’s NATO allies, all of which would generally be viewed as democracies.

His democrat credentials have also been tarnished by his interventions in the Syrian and Libyan civil wars, energy rows with Greece and Cyprus, purchase of Russian missile defense systems, and support for the Palestinian terrorist group Hamas.

“It’s very difficult to know who you would invite and who you would not invite,” Hans Kundnani, a senior research fellow at London-based Chatham House, said during a recent Australian Broadcasting Corporation podcast on Biden’s proposed summit.

In cases where a democracy is morphing towards authoritarianism, “it is very difficult to know where you draw the line,” he said, pointing to India as “precisely such a difficult case.”

“Do you make a big tent and include also a lot of the more flawed democracies or do you exclude them, with the possibility that they can be pushed into the arms of China and Russia?” Jonas Parello-Plesner, executive director of the Denmark-based non-profit Alliance of Democracies Foundation, asked in the same podcast.

He suggested that one possibility would be to require countries to “sign up to some pretty stringent criteria and to take some actions” at home, thus putting the onus of “backsliding” democracies to take the necessary steps or effectively rule themselves out.