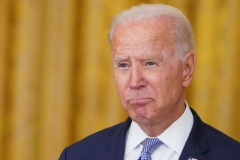 President Joe Biden speaks about how his Build Back Better agenda will lower prescription drug prices, in the East Room of the White House in Washington, DC, on August 12, 2021. (Photo by MANDEL NGAN/AFP via Getty Images)

“So much for the idea that there would be a ‘seasonal downturn’ in illegal immigrant crossings at our southern border!” Graham said in a statement, referring to the Biden administration’s explanation for record numbers of migrants apprehended at the border.

“In July there were over 212,000 illegal immigrants who came into the country – and that’s not counting those who got away. Only God knows how many we missed,” he said. “The men and women of the Border Patrol are heroes who are being asked to do the impossible.

“Between the crisis at the border and the debacle in Afghanistan, one could argue that President Biden is the most incompetent national security president in modern history,” Graham said. “The only thing worse than being incompetent is being stubborn to the point that you can’t look at the facts and change your mind when necessary.

“When it comes to the border and situation in Afghanistan, the worst is yet to come,” the senator predicted.

According to the CBP website, “In total, there were 212,672 encounters along the Southwest Border, 27 percent of which involved individuals who had at least one prior encounter in the previous 12 months, compared to an average one-year re-encounter rate of 14 percent for Fiscal Years 2014-2019.”