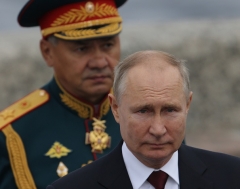 Moscow (CNSNews.com) – Russian Defense Minister Sergei Shoigu pledged this week that Moscow would step up military support to its Central Asian allies as the Taliban continued to rapidly expand its hold on territory in Afghanistan.

Shoigu’s remarks come after the conclusion of a week-long trilateral exercise involving 2,500 troops from Russia, Tajikistan, and Uzbekistan at a training ground near the Tajik-Afghan border. Concurrently, Moscow also held a joint military exercise between 1,500 Russian and Uzbek soldiers at a military base in Uzbekistan.

Shoigu said Tuesday Russia plans to continue holding drills on the Afghan border in the near future “to keep the gunpowder dry.” The defense minister also promised to help Central Asian governments “modernize” their armies to help them to respond quickly to potential threats from Afghanistan.

“All the threats that came from Afghanistan earlier – the drug trafficking, the penetration of terrorists into our country through Tajikistan, Kyrgyzstan, Uzbekistan – are not diminishing,” he told the participants of a youth educational forum outside of Moscow.

Over the past three months, the Taliban has gained major ground in Afghanistan as U.S. troops complete their withdrawal from the country after nearly twenty years of wars. In just the past week, the Islamist group has captured ten provincial capitals and now reportedly controls two-thirds of Afghanistan.

A recent U.S. intelligence assessment has warned that the Taliban could seize Kabul, Afghanistan’s capital, within 90 days.

Last month, the United Nations refugee agency UNHCR warned of a “looming humanitarian crisis” in Afghanistan and said that a growing instability in the country has displaced an estimated 270,000 Afghans from their homes since the start of the year.

Russia still maintains a significant military and economic presence in neighboring Central Asia and the escalating violence has put Moscow on alert.

The Kremlin has long expressed concern Afghanistan could become a safe haven for jihadist groups such as al-Qaeda or ISIS, which could destabilize governments in the region.

Russia’s attitude toward the Taliban has been more ambivalent, however. Although the Taliban is outlawed in Russia, Moscow has held talks with the group in recent years. Russia’s special envoy on Afghanistan Zamir Kabulov even suggested last month that its recent battlefield victories could have “positive” implications for regional security.

“The fact that the Taliban are taking control of districts [in the north] has a positive aspect to it,” the Russian news website Interfax quoted him as saying. “Why? Because most of these [other extremist] groups are not focused on domestic matters, but on Central Asia, Pakistan or Iran.”

“The Taliban fighters who are taking over these districts are their sworn enemies, unlike the Afghan government, not to mention the Anglo-Saxons.”

During a visit to Moscow last month, a Taliban delegation pledged that the group “won’t allow anyone to use Afghan territory to attack Russia or neighboring countries.”

Russia has also cultivated ties with anti-Taliban politicians such as former Afghan President Hamid Karzai, while moving to strengthen its military presence in Central Asia.

In late April, Russia and Tajikistan held a large-scale exercise near the Afghan border involving over 50,000 troops from both countries. Moscow has also begun deploying new weapons and military hardware to its military base in Tajikistan, which currently houses around 7,000 troops.

At the same time, Russia has sought to position itself as a mediator in intra-Afghan peace talks.

On Wednesday, Russia convened a meeting of the “extended troika” – a group also featuring the U.S., China, and Pakistan – in Doha, Qatar. The format is meant to bring together major foreign players in Afghanistan to push for a political settlement in the war-torn country.

Previous rounds of “extended troika” negotiations were held in mid-March in Moscow and in late April in Doha.