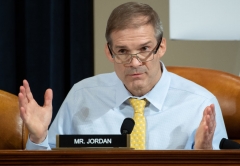 “I don’t want to hear anything about COVID cases in Florida, mask mandates in New York, vaccine passports. I don’t want to hear anything about that until the Biden administration deals with the crisis they created on our southern border. There is no other conclusion any rational person can reach other than this is intentional. This is deliberate. They are deliberately trying to harm our country,” he said.

“They have created a borderless hemisphere, and the American people need to understand it’s deliberate. This is what they’re doing, and they’re trying to shift blame and shift everything else to where it doesn’t belong, trying to attack governors who are actually trying to do the right thing for their, for their constituents, Governor Desantis and Governor Abbott,” Jordan said.

Host Sean Hannity said that American citizens are subjected to vaccine passports, vaccine mandates and mask mandates, but illegal immigrants that are crossing the border in record numbers aren’t required to be tested for the coronavirus.

“This is the exact kind of thing that the American people see and feel and recognize instantly as just plain wrong. When we have to go through all these hurdles ourselves, and then we look and we say, but other people, because they came here illegally, don’t have to get subject to what we’re subject to? This is how voters turn out in record numbers,” said Ari Fleischer, former press secretary for President George W. Bush.

“It just inspires anger, because people know the government is doing something they should not be doing, but look, on the people coming here, Sean, as you know, I’m a first generation American. My mother is an immigrant to this great country,” Fleischer said.

“I want immigrants to come to America, but you have to come here illegally, and this is why the biggest mistake Joe Biden has made was to stop building the wall. It was working. It’s common sense, and it still allows people to come here legally because they are coming here the right way, and that would have helped us with COVID too,” he said.

When asked what Congress can do to stop lawlessness at the southern border, Jordan said, “No, all we can do is talk about what we did. We can draw to the American people’s attention just how bad it is. We can say what we all know now to be the case, that this is intentional. This is deliberate. This is trying to harm the country. This is creating a borderless hemisphere, as I said before.

“We can keep talking, but frankly, Ari’s right. We’re going to win back the House and then we can begin to do something, but Joe Biden is the executive branch. He’s the one who has to enforce the law of the land, and he refuses to do that. The other thing we can do is we can quit listening to Dr. Fauci. He’s been wrong on everything,” the congressman said.

“I would say this, how about we start listening to parents and stop listening to Dr. Fauci? That would help the situation overall in our country, as well. It is frustrating, but the truth is they are deliberately and intentionally doing this,” he said.

“We’ve been here before. We were there with President Obama in 2010. Republicans had the biggest win in the House in 70 years. Republicans have the ability to communicate and express what’s wrong,” he said.

“When Joe Biden goes on this massive redistribution of income, biggest spending spree, allowing people to come into the country illegally, not handling COVID properly, Republicans have a great case to make for why the Democrats and Joe Biden should be thrown out,” Fleischer added.