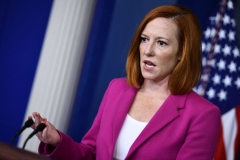 NSNews.com) – Fox News White House Correspondent Peter Doocy asked White House Press Secretary Jen Psaki on Wednesday whether President Joe Biden is responsible for creating some vaccine hesitancy when he expressed distrust during the campaign in former President Donald Trump’s efforts to get emergency authorization for COVID-19 vaccines and get them to the American people through Operation Warp Speed.

Psaki denied that Biden’s remarks during the campaign had any effect on vaccine hesitancy from the American people, and she pointed out that Trump once suggested people could inject themselves with bleach to cure themselves of the coronavirus.

DOOCY: As the president tries to reach unvaccinated Americans, has there been any thought looking back to the possibility that he may have created some vaccine hesitancy when last year around this time the previous administration was rushing to get a vaccine authorized, and the now president said, ‘I trust vaccines. I trust scientists, but I don’t trust Donald Trump, and at this time the American people can’t either.’

PSAKI: I think it’s safe to say he still doesn’t trust Donald Trump, so that hasn’t changed, but he does trust scientists. He does trust data experts, and he does trust people leading the CDC, the FDA, which is the gold standard of approval for vaccines. I’d also note – ‘cause this question often comes up – that the president has repeatedly given credit to scientists and experts from the prior administration, even as recently as just a few weeks ago for their role in moving the vaccines forward.

DOOCY: Yes, but at the time, when Donald Trump was out there saying, we’re going to have a vaccine in the next couple weeks, next couple months, and Joe Biden is out on the campaign trail saying, don’t trust Donald Trump, did that create any kind of vaccine hesitancy?

PSAKI: Not that we’ve seen in the data. I would note that at the time just for context, the former president was also suggesting people inject versions of poison into their veins to cure COVID, so I think that’s a relevant point.

DOOCY: And Joe Biden then vice president was saying, we gotta wait until something is full authorized, and it’s still not.

PSAKI: Well the FDA works on the timeline of science. At the same time, we’ve also seen tens of millions of people’s lives saved who have gotten the vaccine. That data is clear across the country.