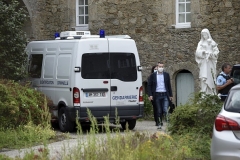 French police at the scene where the body of the priest was found, in Saint-Laurent-sur-Sevre on Monday. (Photo by Sebastien Salom-Gomis/AFP via Getty Images)

Paris (CNSNews.com) – The murder of a Catholic priest in France, allegedly at the hands of an illegal immigrant who he was accommodating on the orders of a court, has sparked impassioned debate here, as right-wing politicians slam the government for what they view as lax immigration policies.

Adding fuel to the debate is the fact that Emmanuel Abayisenga, the Rwandan national who confessed to police the killing of 60-year-old Fr. Olivier Maire, last summer tried to burn down the cathedral in Nantes, causing severe damage.

Abayisenga, who has lived in France illegally since 2012, was working as a volunteer at the cathedral at the time, and admitted to having started the fire.

After that incident, authorities rejected Abayisenga’s asylum claim and he was charged with arson, with the trial scheduled to resume this month.

The 40-year-old was detained from July last year until May 2021, when he underwent psychiatric treatment. According to media reports he was placed under “judicial supervision,” with the stipulation that he live with the Montfort Missionaries, a Catholic community focused on charity and hospitality.

The incident has stoked criticism, especially from politicians on the right.

“This man should never have entered France, even less staying in France after the Nantes cathedral burned down,” said Laurent Wauquiez, a Republican lawmaker. “We have before us the consequences of our cowardice and our blindness.”

Other Republican lawmakers slammed what one called “appalling state failure.”

Sébastien Chenu, spokesman for the far-right National Rally, told reporters, “Every day our country is sinking a little deeper. We are really going to have to wake up.”

“In France, we can be illegal, burn the cathedral of Nantes, never be expelled, and then murder a priest,” tweeted National Rally leader Marine Le Pen, saying the incident showed the complete failure of the government and Interior Minister Gérald Darmanin.

Another National Rally lawmaker, Jérôme Rivière, opined that “the laxity of Gérald Darmanin and minister of Justice Eric Dupond-Moretti is killing the country. They must be accountable of their acts!”

Darmanin hit back, accusing Le Pen of exploiting a tragedy for political ends without knowing the facts.

“This foreigner was not deportable despite his deportation order as long as his judicial control [order] was not lifted,” he tweeted.

Dupont-Moretti similarly wrote in a Facebook post, “Although he was subject to an obligation to leave French territory, he could not be expelled because of his judicial control [order].”

The issue of immigration and asylum is expected to feature prominently in the campaign ahead of presidential elections scheduled for April next year.