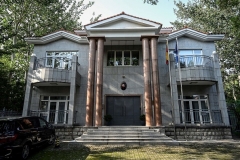 The Lithuanian Embassy in Beijing. (Photo by JADE GAO/AFP via Getty Images)

(CNSNews.com) – China responded angrily Tuesday to Lithuania’s plans to open a “Taiwanese Representative Office,” recalling its ambassador from Vilnius and demanding that Lithuania withdraw its envoy for according even that limited level of recognition to the self-governing island democracy.

Taiwan, which Beijing insists is part of the “one China,” has representative offices in more than 50 countries around the world, but all are named “Taipei Economic and Cultural Office” or similar, in recognition of the sensitive sovereignty issue. (Taiwan also has fully-fledged embassies in the 15 countries with which it has diplomatic ties. Those countries as a result do not have diplomatic ties with China.)

Lithuania is believed to be the first to agree to opening an office under the name of “Taiwan” – and that has Beijing incensed.

“The decision brazenly violates the spirit of the communiqué on the establishment of diplomatic relations between China and Lithuania and severely undermines China’s sovereignty and territorial integrity,” the foreign ministry said in a statement on Tuesday.

“The red line of safeguarding national sovereignty and territorial integrity shall not be crossed,” it said. “The Chinese side warns the Lithuanian side that there is only one China in the world and the People’s Republic of China is the sole legal government representing the whole of China.”

The ministry urged Lithuania to “immediately rectify its wrong decision,” adding a warning to Taiwan that “any attempt at separatist activities in the international arena is doomed to fail.”

Lithuania’s foreign ministry said it “regretted” the Chinese move, but reiterated that the country was “determined to pursue mutually beneficial ties with Taiwan like many other countries in the European Union and the rest of the world do.”

“We support our European partners and our allies as they develop mutually beneficial relations with Taiwan and resist the PRC’s coercive behavior,” he said.

Taiwan’s government and politicians thanked Lithuania for standing up to China, with foreign ministry spokeswoman Joanne Ou praising its “resolute will” to defend freedom and national dignity.

The government’s Mainland Affairs Council, which handles issues relating to China, said that Taiwan as a sovereign country and a member of the international community had the right to engage in bilateral cooperation with other countries.

The “Taiwanese Representative Office” decision is latest in a series of steps by Lithuania, a small eastern European democracy that threw off communist domination just a generation ago, in defiance of China’s communist rulers.

Last November, the incoming liberal-conservative coalition signed an agreement pledging to pursue a “values-based foreign policy” that included defending “those fighting for freedom around the world, from Belarus to Taiwan.”

Lithuanian lawmakers have strongly supported calls for Taiwan to be allowed to take part in the World Health Organization’s annual assembly – a call sternly opposed by China, and ultimately unsuccessful.

Lithuania earlier this year withdrew from the “17+1” group, an initiative launched by China in 2012 to enhance business and investment cooperation between itself and 17 countries in eastern and central Europe.

Last June, Lithuania donated 20,000 COVID-19 vaccine doses to Taiwan. A tweet that day by Lithuanian Foreign Minister Gabrielius Landsbergis to the effect that “Freedom-loving people should look out for each other” was warmly received in Taiwan.

More broadly, Lithuania signed up to joint statements expressing concern about mass abuses against Uyghurs in Xinjiang and Beijing’s clampdown on democracy in Hong Kong, and skepticism about the findings of an initial WHO-convened study into the origins of the coronavirus. Lithuania’s parliament in May described China’s treatment of Uyghurs as a “genocide.”

In a column Tuesday Hu Xijin, editor-in-chief of the CCP paper Global Times, described Lithuania as “a U.S. running dog that barks most fiercely at the strategic rivals of the U.S. in exchange for its protection.”

“It is rare to see small countries like Lithuania that specifically seek to worsen relations with major powers,” he wrote. “I believe that Lithuania will eventually pay the price for its evil deed of breaking international rules.”

Lithuania’s government says it plans to open a representative office in Taipei by the end of the year, to focus on deepening “economic and cultural relations.”

No date has been given for the planned opening of the Taiwanese office in Vilnius.

It will be the first to be established on European soil since August 2003, when the “Taipei Representative Office” opened in Bratislava, Slovakia.

Slightly larger than West Virginia, Lithuania is located between Belarus, Poland, Latvia, and Russia’s Kaliningrad exclave, and has a population of around 2.7 million.