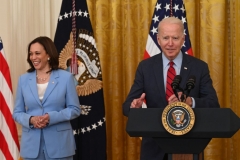 President Joe Biden, with Vice President Kamala Harris, speaks about the infrastructure deal from the East Room of the White House in Washington, DC, on June 24, 2021. (Photo by JIM WATSON/AFP via Getty Images)

(CNSNews.com) – President Joe Biden said Tuesday that he doesn’t believe he has the presidential powers to intervene in states that ban mask mandates like Texas and Florida.

“I don’t believe that I do thus far,” the president said at an event to celebrate the Senate’s passage of a bipartisan infrastructure deal.

“We’re checking that. We — but there are on — federal workforce, I can, and I think that people should understand, seeing little kids — I mean, four, five, six years old — in hospitals, on ventilators, and some of them passing — not many, but some of them passing — it’s almost, I mean, it’s just — well, I should not characterize beyond that,” he said.

Biden was also asked about his concerns that so many children have tested positive for COVID-19 and his concerns about schools staying open.

“How concerned are you right now about children in schools, given that 94 percent of children, many of them unable to get vaccinated because they’re too young, have now tested positive? What are your concerns, and how concerned are you that schools will not be able to stay open as you’ve asked for?” a reporter asked.

“That is what is happening, and so, my plea is that for those who are not vaccinated: Think about it. God willing, the FDA is going to be coming out in a reasonable timeframe to say this vaccine is totally safe,” the president said.

“We’ve seen millions of doses around the world — a billion doses already — and we know how it’s transmitted, and one of the things that I find a little disingenuous: When I suggest that people in zones where there is a high risk wear the masks like you all are doing, I’m told that government should get out of the way and not do that; they don’t have the authority to do that,” he said.

“And I find it interesting that some of the very people who are saying that, who hold government positions, are people who are threatening that if a schoolteacher asks a student if they’ve been vaccinated, or if a principal says that, ‘Everyone in my school should wear a mask,’ or the school board votes for it, that governor will nullify that,” Biden said.

“That governor has the authority to say, ‘You can’t do that.’ I find that totally counterintuitive and, quite frankly, disingenuous,” the president added.