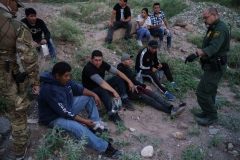 A US Border Patrol agent processes a group of migrants in Sunland Park, New Mexico on July 22, 2021. (Photo by PAUL RATJE/AFP via Getty Images)

(CNSNews.com) – The White House unveiled a series of steps Tuesday that the Homeland Security Department (DHS) is taking to handle the crisis at the border, including deporting migrants by plane to the interior of Mexico and allowing an immigration official to determine whether a migrant is seeking protection or plans to apply for asylum.

Fox News White House Peter Doocy asked White House Press Secretary Jen Psaki on Tuesday, “On immigration, the Washington Post’s editorial board wrote … that administration has driven a policy whose incoherence has yielded pressure at the border that may costs Democrats one or both houses of Congress. Is there any plan to try to do something different down there?”

“Let me give you an overview, a short overview – I promise of some of the steps that we’re taking, some of them that have been newly implemented over the last week or two, and I know there’s been a lot of news going on,” the press secretary said.

“There are a number — one is steps we’re continuing to take under Title 42: lateral flights, which is a newer step that we have started to take, which is moving migrants from one part of the border to another where there might be more processing capability or facility capacity to expel migrants under Title 42. There are some higher traffic areas. That is one step we just started taking recently,” Psaki said.

“We’ve also started initiating as of last week as of last Friday expulsion flights into Mexico. The Department of Homeland Security started transporting certain families expelled under Title 42 by plane to the interior of Mexico. This is in order to attempt to cut down on recidivism and further spread of the Delta variant,” she said.

“Finally, the last piece that we started implementing more recently is expedited removal. With the exception of unaccompanied minors, as you well know, it’s currently U.S. policy to expel families and individuals under Title 42 when possible,” the press secretary said.

“However, under a variety of reasons, that is not always possible, and that’s why expedited removal comes in. It allows an immigration official, generally a CBP official, to determine if a migrant is seeking protection or has an intent of applying for asylum. If they do, of course, they would go through the process. If they do not, this would allow for removal on a more rapid basis,” Psaki added.