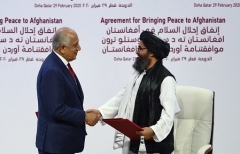 (CNSNews.com) – The State Department has dispatched Special Envoy Zalmay Khalilzad to Doha, the capital of Qatar, for meetings designed to respond to “the rapidly deteriorating situation in Afghanistan.”

The Pentagon acknowledges that fighting between Taliban and government forces “is clearly not going in the right direction.”

As provincial capitals and remote rural areas continue to fall to the Taliban, reports of abuses and the killing of civilians – including the targeted killing of journalists and others – are drawing widespread condemnation.

The U.N. children’s agency UNICEF said Monday 27 children had been killed and another 136 injured in the fighting in the past 72 hours alone, most of them in Kandahar province.

“The increased tempo of Taliban military engagement, resulting civilian causalities in armed conflict between the sides, and alleged human rights atrocities are of grave concern,” the State Department said in a statement announcing Khalilzad’s mission.

“He will press the Taliban to stop their military offensive and to negotiate a political settlement, which is the only path to stability and development in Afghanistan.”

The jihadists escalated their offensive against the Afghan National Defense and Security Forces (ANDSF) after the withdrawal of U.S. and coalition forces began in May, seizing control of hundreds of rural districts across Afghanistan before also advancing on a number of the country’s 34 provincial capitals.

Pentagon Press Secretary John Kirby confirmed during a briefing that “roughly five” provincial capitals have fallen to the Taliban in recent days. (A sixth was reported on Monday.)

He said Defense Secretary Gen. Lloyd Austin continues to believe the ANDSF “have the capacity to make a big difference on the battlefield.”

The U.S. military would continue to support Afghan forces, “with airstrikes, for instance,” where and when it is feasible, he said, “understanding that it’s not always going to be feasible.”

But as to whether that type of kinetic support would continue beyond the end-of-August target date for the completion of the withdrawal, Kirby was unclear.

President Biden has said the administration will not allow Afghanistan to be used as a springboard for terrorists to once again pose a threat to the U.S. homeland. To that end, the Pentagon says the U.S. military will retain “over-the-horizon counterterrorism capabilities” going forward.

Asked about the possibility of airstrikes in support of Afghan forces after the end of the month, however, Kirby said he had no update on “what authorities might exist after August 31,” and did not want to “speculate what things are going to look like beyond that.”

“We’re focused on completing the drawdown by the end of the month and by transitioning to a different bilateral relationship with Afghan forces, that will be one of support, financial and logistical maintenance support from outside the country.”

Asked why the U.S. military has confidence in the ANDSF’s abilities given developments on the ground, Kirby pointed to the size of the force – more than 300,000 soldiers and police – and the fact it has an air force, unlike the Taliban.

“They have a lot of advantages. Now, they have to use those advantages. They have to exert that leadership. And it’s got to come both from a political and from the military side.”

The Afghan defense ministry said early Tuesday hundreds of Taliban fighters had been killed in ANDSF operations supported by Afghan Air Force airstrikes in a dozen provinces over the past 24 hours. Both the Taliban and Kabul government frequently cite what are suspected to be inflated numbers of enemy casualties.

The Afghan ambassador to the U.N. told the U.N. Security Council on Friday that more than 10,000 foreign terrorists were now in the country fighting alongside the Taliban – a claim which the Taliban at the weekend dismissed as “fake.”

The presence of foreign terrorist fighters in the country could violate commitments the Taliban made in the agreement it signed with the Trump administration in Doha in February 2020, which paved the way for the troop withdrawal.

In addition to commitments on freeing prisoners and entering into “intra-Afghan” negotiations with the government, the Taliban pledged to:

— Instruct its members “not to cooperate with groups or individuals threatening the security of the United States and its allies.”

–Send “a clear message that those who pose a threat to the security of the United States and its allies have no place in Afghanistan.”

— Prevent any group “from threatening the security of the United States and its allies,” prevent them “from recruiting, training, and fundraising,” and refrain from hosting them.

–Deny asylum or residence in Afghanistan, or visas, passports, travel permits, or other legal documents, to individuals posing a threat to the security of the U.S. and its allies.