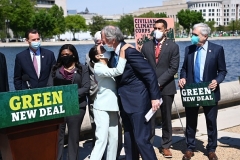 Because no Republicans support the “human” infrastructure bill, Democrats are using the budget reconciliation process, which requires only 51 votes for passage, to advance their climate agenda and new entitlement programs.

Markey referred to the new U.N. climate report released on Monday, which declared a “code red” for humanity:

We are going to take this as a final warning that we must take bold, dramatic action. Um, the planet is running a fever. There are no emergency rooms for planets. And we have to take action.

So, we’re going to start the debate, tomorrow or Wednesday, on a green infra — a green-budget resolution. that will respond to the code red. And in that bill, we’re going to have tax breaks for wind and solar and all-electric vehicles and for battery-storage technologies.

And it’s going to be a response, within the same week, that the — the U.N. — the climate scientists of the world say that this is the national security, the health, the economic, the moral issue of our time. We will begin to respond.

Markey said Democrats don’t expect a single Republican to support the budget reconciliation. He said Democrats will have to “work with” Senate Democrats Joe Manchin and Kyrsten Sinema, who have expressed reservations about the monster bill with a multi-trillion price tag.

Markey said Democrats will “have to do the same thing” — work without Republican support — to pass tuition-free community college, free pre-kindergarten, expanded family leave, all of which are included in the reconciliation bill:

“I hate to say it,” he said. “All of this is going to have to be done, in this bill, without Republican support. It’s a sad commentary on the contemporary state of the Republican Party and our country, but so be it. We’ll have to work together. Chuck Schumer’s doing a great job. President Biden’s doing a great job. I think we can finish it off, this week, and then begin the process of working with the House to put a bill on the desk of president Biden.”

Markey echoed other Democrat leaders who say the bipartisan bill must be “welded” to the much larger reconciliation bill.

“They have to be heading to the president’s desk together. You can’t just break off roads and bridges and broadband, as important as they are, and leave out climate and children and community college and child-tax credits. You can’t do that,” Markey said.

“So, we are going to keep it together, all the way to Joe Biden’s desk. And when he signs that bill, yeah, we’ll have the roads and bridges. But we’re also going to have a bridge for every family in our country to be able to survive and thrive in the 21st century. And we’ll have the funding for the clean-energy revolution that we need, in order to lead the world.”

Some Republicans note that the only sure way to block the budget reconciliation bill — which, again, contains most of the Biden agenda — is to vote no on the bipartisan bill. House Speaker Nancy Pelosi has said she will not take up the bipartisan bill until the Senate sends over the other bill as well, so it’s all or nothing.

Note: During one of the presidential debates in September 2020, then-candidate Joe Biden said, “No, I don’t support the Green New Deal.”

But the Biden-Harris campaign website said the opposite, as follows: “Biden believes the Green New Deal is a crucial framework for meeting the climate challenges we face. It powerfully captures two basic truths, which are at the core of his plan: (1) the United States urgently needs to embrace greater ambition on an epic scale to meet the scope of this challenge, and (2) our environment and our economy are completely and totally connected.”