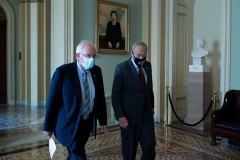 Passage of that bill means a much larger, $3.5-trillion, Democrats-only entitlement bill will now advance as well.

On a more serious note, Kennedy explained why he was a “no” vote on advancing the bipartisan bill:

Early on I was a likely yes on this bill — I mean, you know, who’s not for infrastructure? I’m for children and prosperity too. But then I got a copy of the bill and I realized pretty quickly that if you look up stupid stuff in the dictionary, there’s a picture of this bill.

They told us there were no tax increases, there are. My state’s going to have to pay $1.3 billion in new taxes on our petrochemical industry. They told us, as you pointed out, that the Democrats were really wary of this bill and that if we pass this bill it would make it harder for them to pass their $5 trillion tax-and-spending binge reconciliation bill. Well, if that’s true, how come every Democrat voted for this infrastructure bill?

And finally they told us that it’s not going to add to inflation. But it will.

Kennedy said inflation is a “horrible tax on middle America.”

And we’re going into a fight now with the Democrats over raising the debt ceiling…and the argument that I’d like to make is, which I can make — Senator Schumer, this debt is yours. This debt is yours. But the truth of the matter is, that on this last bill, the infrastructure bill, this debt belongs to both Democrats and the Republicans.

Host Laura Ingraham fumed that by advancing the bipartisan bill, the 18 Republicans “gave Joe Biden a lifeline,” because passage of that bipartisan bill paves the way for Democrats to ram through their entire agenda in a second, massive welfare bill.

“And I can’t tell you how angry so many people are out there about that one fact,” Ingraham said. “It’s fraudulent and its false, and (if) all 18 think they’re going to escape for six years, they’re not. People are going to have a long memory about this.”