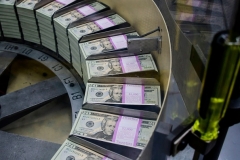 (CNSNews.com) – U.S. taxpayers do need to spend money on infrastructure, but the “bipartisan” bill the Senate is expected to pass today is the wrong one, Sen. Ron Johnson (R-Wis.) told Fox News’s Maria Bartiromo on Tuesday.

“We shouldn’t be signing up to the green new deal, part one; we shouldn’t be supporting things like breathalyzers in new cars, which will drive up the cost of cars,” Johnson said.

“Again, to me, this is a disaster bill. When we do need to spend money on infrastructure, I have no idea why Republicans would want to have any of their fingerprints on this bill. Plus, it facilitates Bernie’s…blowout budget package.”

Sen. Bernie Sanders (I-Vt.), chair of the Budget Committee, has rolled much of the Democrats’ social or entitlement agenda into a second, budget reconciliation bill that could pass with just 51 all-Democrat votes.

No Republicans support Sanders’ bill, which is expected to have a price tag well above the oft-mentioned $3.5 trillion. House Democrats insist they will not take up the first, bipartisan bill until the second, monster bill arrives as well.

Johnson said assurances that the smaller, bipartisan infrastructure bill would be completely paid for have turned out to be false:

Now we’re finding out, no, the CBO says it’s going to cost about $256 billion in additional deficit spending. Again, I can’t explain what my colleagues are — why they’re supporting this thing. I wish they weren’t. I wish we were standing pat.

And again, that’s what’s going to happen in this $3.5 trillion-dollar budget package, is, it’s going to be new entitlements. For example, a half a trillion dollars on energy, that is more than the full new green deal; education, social services, income security, again, that’s not Social Security, that’s not Medicare, it’s income security. Those are new entitlements. And as Ronald Reagan said, the closest thing to eternal life on this Earth is a government program.

And so their dishonesty in terms of how they’re going to score this — they’ll put these things in place for a couple years, get a two- or three-year score on it, but we know it will never end…what’s the unfunded liability of these new entitlements? This is going to completely change the level of the welfare state. It’s going to make more Americans dependent on the federal government.

And again, when we’ve talked about these things in the past, we’ve always at least pretended we’re going to secure border. My amendment to just build the wall that’s already been bought and paid for was defeated on a party-line vote, except for Joe Manchin joined with us. They are not interested in border security, and this is a crisis, this is a disaster, what’s happening on the border right now. And the mainstream media and the administration is in a complete state of denial.

Although the Biden administration has insisted that people earning less than $400,000 a year will not pay higher taxes, that’s missing the point, Johnson said. He said raising corporate taxes will drive more corporations overseas; and he said the middle class will pay for the massive package through inflation.

“So in the end, it’s the American public that’s going to pay more; our kids and grandkids in terms of reduced future, lower, opportunities — less prosperity in the future. This is really sad what’s happening.”