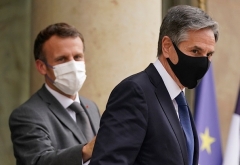 (CNSNews.com) – Secretary of State Antony Blinken told the U.N. Security Council on Monday that the international community must hold the Iranian regime accountable for the recent deadly drone strike on a commercial ship, because “failing to do so will only fuel their sense of impunity.”

Earlier in the day, French President Emmanuel Macron held an hour-long phone conversation with Iran’s newly-inaugurated President Ebrahim Raisi and, according to the Iranian presidency, “congratulated Ayatollah Raisi on his inauguration and wished him success.”

“Iran and France can play a role in establishing peace and stability in the region through their cooperation,” it quoted Macron as telling Raisi, who in turn said he welcomed “the development of relations with France based on mutual interests and mutual respect.”

Neither the Iranian nor the French readout of the call – Raisi’s first with a Western leader – referred specifically to the July 30 attack on the Israel-linked Mercer Street, which killed two Europeans on board, although both touched on the issue of maritime security.

The French readout said Macron had “reiterated France’s attachment to the preservation of maritime safety and freedom of navigation,” while the Iranian one said Raisi had told Macron that Iran was “very serious about providing security and maintaining deterrence in the Persian Gulf region and the Sea of Oman, and will confront the factors that deprive security.”

The Iranian regime has denied responsibility for the attack, but Blinken told the Security Council that, “upon review of the available information, we are confident that Iran conducted this unjustified attack, which is part of a pattern of attacks and other provocative behavior.”

“These actions threaten freedom of navigation through this crucial waterway, international shipping and commerce, and the lives of people on the vessels involved,” he said.

“It is on all of our nations to hold accountable those responsible. Failing to do so will only fuel their sense of impunity and embolden others inclined to disregard the maritime order.”

During the meeting Blinken’s French counterpart, Jean-Yves Le Drian, also condemned the attack on the Mercer Street, although without mentioning Iran.

France did join the U.S. and other members of the G7 in a joint statement late last week, condemning the attack on the ship, and including the line, “All available evidence clearly points to Iran.”

The Liberian-flagged ship is managed by a London-based company owned by an Israeli shipping magnate.

U.S. Central Command earlier released a statement on the findings of a team of investigators, deployed to the vessel from the U.S. Navy carrier USS Ronald Reagan, to the effect the Mercer Street had been targeted by an unmanned aerial vehicle (UAV) “loaded with a military-grade explosive.”

Recovered pieces of the drone, including part of a wing and internal components, “were nearly identical to previously-collected examples from Iranian one-way attack UAVs.”

“U.S. experts concluded based on the evidence that this UAV was produced in Iran,” Central Command said. (It also found that the tanker had been targeted one day before the attack, “by two unsuccessful explosive UAV attacks.”)

A decision by the European Union to send a senior diplomat to attend the ceremony continues to draw strong criticism, given calls for Raisi to be investigated for mass human rights violations including his alleged leading role in the summary executions of thousands of dissidents in 1988. 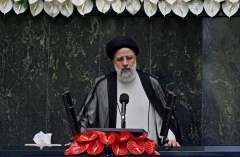 “It is time for the E.U. to send a clear message to Iran that Europe will not turn a blind eye either to human rights abuses or acts of terror or piracy, and that Iran will face consequences for its actions,” a group of nine members of the European Parliament wrote in a letter to E.U. foreign policy chief Josep Borrell on Monday.

“Honoring the inauguration of the ‘Hangman of Tehran’ only serves to encourage such behavior.”

The E.U. bureaucracy has responded to the criticism by saying it was important to keep communication channels open, and that the priority for Borrell was to get the Iran nuclear deal back on track.

The E.U. acts as coordinator of the 2015 agreement known as the Joint Comprehensive Plan of Action (JCPOA), and France, Germany and Britain (along with Russia and China) are parties to the accord.

President Trump withdrew from the JCPOA in 2018, and Iran in response stopped complying with the curbs on its nuclear energy program to which it had committed in the deal.

The Biden administration is now seeking to return, a move that would require the U.S. to lift the sanctions reimposed after Trump exited the agreement, while Iran would have to return to compliance.

Tehran’s readout of the Raisi-Macron call said Raisi accused the U.S. of “repeated and gross violations” by imposing sanctions, and called on both the Europeans and U.S. to fulfil their JCPOA obligations.

The French callout said Macron urged Iran to quickly return to negotiations in Vienna aimed at reviving the JCPOA and to stop its activities that violate the agreement.

In one of his earliest appointments, Raisi named as his first vice president a man sanctioned by the outgoing Trump administration early this year, along with the powerful conglomerate he has headed for more than a decade.

The Treasury Department said at the time that the conglomerate headed by Mohammad Mokhber controls “large swaths of the Iranian economy, including assets expropriated from political dissidents and religious minorities, to the benefit of Supreme Leader Ali Khamenei and senior Iranian government officials.”

Raisi himself is the target of U.S. sanctions, imposed in 2019, over human rights violations including his role in the 1988 mass executions, along with more recent abuses.

Citing his controversial history, a group of Republican senators is urging the Biden administration to refuse Raisi entry if he seeks to attend the U.N. General Assembly high-level session in New York next month.