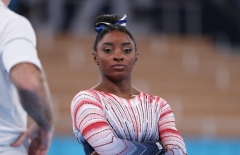 Everyone knows that Simone Biles may be the greatest gymnast of all time, and everyone knows she is black. But few know she is Catholic. Why is that?

The Catholic media mentioned her religious affiliation but the big media did not.

In her autobiography, “Courage to Soar,” Biles mentions the role her religion has played in her life and how it has helped her during times of adversity. She has spoken eloquently about her Confirmation experience, and why she chose St. Sebastian, the patron saint of athletes, as her confirmation name. She occasionally carries a statue of St. Sebastian and often carries her white rosary in her gym bag.

So why the blackout? The media constantly tell us that President Biden carries a rosary, so why the reticence when it comes to Biles?

Politics explains why. Biden’s policies are at war with the teachings of the Catholic Church, alienating many Catholics, including the bishops. But the media want him to succeed, and their way of rescuing his religious status is to flag his rosary story.

The situation with Biles is different. Having experienced mental stress at the Olympic games, forcing her to withdraw from a few events, some in the media exploited her racial status with tales of victimhood. None was more melodramatic than Politico.

“Biles is part of a new, more subtle chapter of black activism that is elevating personal reflection and self-care over the emotional stoicism and reliance that has long been a feature of black struggle, and of black success.” Those words of wisdom belong to Erin Aubry Kaplan, an opinion writer for the New York Times. Simply because Biles was stressed out was enough to prove that she has earned a place in the Black Struggle Hall of Fame.

The way the media frame things, to be black is to be a victim; to be a Catholic is to be a victimizer. Therefore, citing Biles’ religious affiliation gets in the way of their narrative, which is to cast her as a member of the oppressed class.

All men and women share multiple status identities, and many have a master status. When it comes to public persons, however, the media are not interested in how they identify themselves—they do it for them. In the case of Biles, she is a black female. End of story. No other identities are allowed.

Such is the sad state of identity politics these days.