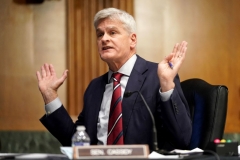 Sen. Bill Cassidy (R-LA) raises concerns about current Covid-19 guidelines during his questioning at a Senate Health, Education, Labor and Pensions Committee hearing to discuss the on-going federal response to Covid-19 on May 11, 2021 at the US Capitol in Washington, DC. (Photo by GREG NASH/POOL/AFP via Getty Images)

(CNSNews.com) – Former President Donald Trump proposed a $1.5 trillion infrastructure package when he was in office, which was supported by Republicans, and only five percent of it was paid for, Sen. Bill Cassidy (R-La.) said Sunday.

CNN’s Dana Bash pointed out that some Senate Republicans said they would oppose the infrastructure bill, because the Congressional Budget Office estimates it adds $250 billion to the deficit. “What do you know that they don’t?” she asked.

“We absolutely said, this is how it was going to be. A half of what we proposed is going to be scored by CBO as paid for. We were up front about that, and a half, because of their rules, they won’t,” Cassidy told CNN’s “State of the Union.”

“Now, the half that we won’t are things that a reasonable person would say, hmm, yes, it’s a pay-for. For example, $53 billion Congress has already appropriated for federal unemployment supplemental payments are not being used for that,” the senator said.

“So, we are repurposing that, just as we told folks we were going to repurpose, repurposing for the sake of paying for this. CBO doesn’t give us credit, but that is $53 billion that we’re repurposing that a reasonable person would say, yes, that pays for it,” he added.

Bash said that under Trump, the national debt climbed almost $8 trillion, “and now some of your colleagues are worried about the debt again?”

CASSIDY: Well, on the other hand, first — the first part of your thing, let’s face it, a lot of that spending was in response to COVID, OK? So, we understood, when COVID broke, we had to put out Payroll Protection Plan.

BASH: That’s true, but a lot of it happened before COVID.

CASSIDY: But, secondly, I will point out that President Trump proposed a $1.5 trillion package, which most Republicans were all for, and only five percent of it was paid for,” Cassidy said.

We have $550 billion of new spending, of which we can reasonably say is paid for, but certainly one-half by CBO score, and now folks are saying, oh, can’t vote for that. OK, well, that’s OK, but, on the other hand, we’re creating jobs. We’re creating bridges. We’re protecting people from flooding. Hopefully, they change their mind.

BASH: So, many in your party say that they’re opposed to this on its substance, but also because that it’s really just cover, giving cover to Democrats, so that they can pass their multitrillion-dollar reconciliation bill. I know you say they’re separate, but a lot of Democrats, including House Speaker Nancy Pelosi, don’t necessarily see it that way. Are they playing you here?” Bash asked.

CASSIDY: The fact that Pelosi says she has to link them tells you she doesn’t have the votes for the $3.5 trillion package.

One of my colleagues said, hey — a Democratic colleague said, infrastructure is the dessert. The $3.5 trillion, spend a lot of money and tax a lot of money, is spinach. I have eaten my dessert, and now I’m supposed to eat my spinach? I don’t think so.

The other thing, the Problem Solvers Caucus, a coalition of 28 Republicans, 28 Democrats, headed by Gottheimer and Fitzpatrick, have come out in favor of this. She doesn’t need a radical left wing. She can pass the infrastructure package with just that committed group of American congressmen and women who want to see our country get better to have the $110 billion for the roads and bridges and highways, et cetera, and the new jobs.

They can pass the infrastructure package without having the radical left, and that, I think, opens a pathway.